or . . . A STRANGE CONVERSATION WITH DUCK

Two things brought this story together: Remembering a funny event and an assignment from Wednesday Academy mentor, Bonnie Riley, to write a story using only dialogue – which is included at the end of this piece.

When Barry and I first moved into the Farmhouse at Tolman Pond in 1969, our only available telephone service was a six-party line. (Or, perhaps it was eight. I can’t remember.) Of course we knew all the neighbors who shared the line, and after conquering the established art of discreet eavesdropping, we also knew most of their business. As they surely knew most of ours!

For instance, we all knew that two of our party-line women talked with each other every morning at 9:00 (often sharing gossip about the neighbors) because, while each of us had our own personal ring, everybody’s ring rang on all of our phones. One woman dialed up the other on Monday, Wednesday and Friday; and vice-versa on Tuesday, Thursday and Saturday. They didn’t gossip on Sunday! 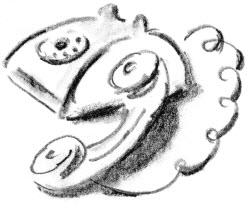 Our personal ring was one long and one short. And if we wanted to call someone on the same party line, we would dial their number and quickly hang up. All the phones on the party line would then ring that number.  When the ringing stopped, it usually meant that the other party had picked up, and said “hello.” So, we’d then pick up our phone again and say “hello”, too. The “hellos” were sometimes pretty awkward, because if the timing was slightly off, the receiving party would often be saying “hello” before the dialing party had picked up again – thus talking to a vacant phone. And when the dialing party finally picked up and said “hello”, it was often confusing as to who was calling whom because both parties were echoing “hellos” back and forth. Of course the eavesdroppers had to time their interference pretty carefully, too, being sure to pick up only after the other parties had said their “hellos”, or otherwise risk revealing their nosiness.

This new and sophisticated rotary telephone had replaced the old hand crank model where a real telephone operator had to make the connections.  In Harrisville, Louise Bergeron worked out of her home down the hill from the store. Cranking the handle would connect you to her, and then she would make your requested connections at her switchboard. (The Harrisville telephone exchange has always serviced the Tolman Pond and Nubanusit parts of Nelson; just as the Sullivan exchange services the rest of the town. And until quite recently, there was a toll charge to call between these two exchanges!) 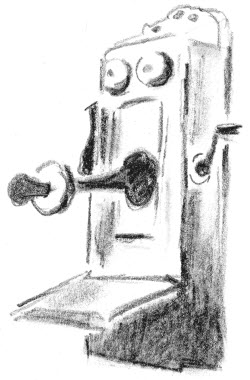 As a kid growing up in Dublin, Allie Fiske was our operator. My father was fire chief, police chief and self-employed, all at the same time. My mother was involved in many town activities, and there were three kids. We could always tell the importance of any phone call coming into the house. Allie had a knack for ringing our phone like a painful out-of-tune melody, but always compatible with its reason.  Fire and police calls would ring out with the urgency of a punk rocker. Mother’s calls somehow had a jumpy lilt to them, and last but not least, our kid-calls took on a rather ho-hum boring drone, as though it were an effort to turn the crank.

But as boring as Allie thought our kid-talk was, I still cranked her up every morning to tell her I was on my way to school. She, in turn, would ring up my best friend to let her know I’d just left home. Susie and I would then meet in the village to walk together down Dublin Hill to school.

When the rotary phones first came to Dublin we missed Allie, just as they missed Louise in Harrisville. But we had fun learning our new numbers, and especially the original exchanges. Although our telephone exchanges never took on the pizzazz of New York City’s MUrray Hill5 or BUtterfield8, they did become our identity for a while. Our telephone number in Dublin changed from 15 to LOcust3-8668 (or 563-8668). Peterborough’s exchange became WAlnut4, Jaffrey was KEystone3 and Keene was ELmwood2. Harrisville became VAnDyke7 and Sullivan was VIctor7.

So, the setting for my story below (written in dialogue!) on this particular lunch break in 1970 is the Tolman Pond Farmhouse, then home to Barry and me; now home to our son Tom Tolman and Larisa Belluscio:

Characters and Other Places:

Karen: Karen Tolman, author
Newt: Newt Tolman, Barry’s uncle, who lived a mile or so up the hill at Greengate, now home to Bill and Carolyn Rainer
Duck: Barry and Karen’s year-old Black Labrador Retriever
Janet: Janet Tolman, Newt’s wife
Sid and Claire: The Partridges, home on Tolman Pond, now Ronda and Carl Berntsen’s
The Spaulding’s: The old “yellow” farmhouse on Tolman Pond, now gone
The Conn’s: A summer “camp” on Tolman Pond, still rented by the same family
Floppy’s: Barry’s mother, whose home was on the rise behind the Farmhouse, now owned by her granddaughters, Stacia and Bee Tolman
The Stable: Once horse stable, converted to dog kennel, converted to guest cabin, converted to rental property

“Hey, Newt, what’s up?” I puzzled, walking through the front door at the farmhouse and finding Newt sitting at our kitchen table with our phone to his ear.

“Oh, Hi, Karen. These darn party lines. I’ve been trying to make a phone call up at Greengate, and – well, I picked up the phone and all I could hear was a barking dog.”

“Yeah, well, I listened a little bit more and I said to Janet, ‘this sounds like Duck.  Will you listen here?’

“So, Janet took the phone and listened.  ‘Hi, Duck,’ she said.  And, sure ‘nough, the dog stopped barking for a minute, like he was listening, and then answered her –  ‘woof, woof.’

“I knew you and Barry were both at work, so I thought I’d better check things out. Make sure everything was OK down here. So, here I am, sitting in your kitchen, talking to your dog on your darn phone. Where the heck is that dog, anyway? He’s got all our phones tied up.” 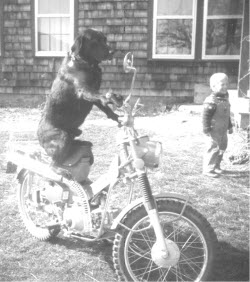 “Well, I don’t know,” I said, worried. “He’s usually right here when we get home from work.”

“Well, listen here,” Newt said, handing me the phone. “I’m sure this is Duck.”

I took the phone and listened. And, sure enough, Duck was barking on the phone. “Duck,” I barked right back, “where are you?” “

“Well, let’s see,” I said, with growing concern. “He’s got to be somewhere around here. What about the other houses on the party line. We gotta find him.”

“Well, there’s Sid and Claire,” Newt said. “I doubt he’d be talking on their phone. Besides, we’d hear their parrot squawking in the background. What about the Spauldings?”

“No,” I said. “I don’t think so. They’ve gone back to Keene. And, the Conn’s have locked up their camp for the winter, so he couldn’t be on their phone.

“Duck,” I barked into the phone again, “Where ARE you?”

“But she’s at the Great Book’s Group in Keene. Besides, I don’t think he could get in there. But, maybe if we go outside, we’ll be able to hear him.”

“Woof, woof,” he persisted, faintly from off in the distance (translated as ‘can you hear me now?’).

“I think he’s up there somewhere,” I said, pointing up the hill behind the Farmhouse. “Maybe in the Stable.  Didn’t you hear him?”

“Yeah, I did, but why’s he barking on the phone?” Newt chuckled.

“Well, I don’t know,” I said, hurrying up the hill toward the Stable. “There might be an old phone in there somewhere – you know, a wire strung down through the bushes from Floppy’s house to make an extension. But the place hasn’t been used in years.”

a pause in conversation as we climb the hill

“Well, here you are, you poor boy!” I cooed comforting my dog. “What’re you doing in here?”

“And, look over there,” Newt pointed. “Looks like he somehow nudged himself through the old stable door, and it closed behind him. And then he knocked the phone off the hook in a panic trying to get out. See over there by the door?

“Gosh darn,” Newt laughed, as we all headed back outside, “Next time you make a phone call, Duck, just remember to hang up when you’re done! Will ya?”

Early Telephone Service/First Telephone Line:
Nelson Town Records Volume 13, page 56
September 10, 1895
“In accordance with a vote of the Selectmen permission is hereby granted to W. H. Elliot to construct and maintain a line of telephone poles and wire for the same within the limits of the Highway between his house in Nelson and Munsonville by the way of Nelson Village.”

Nelson Town Records Volume 13 (sheet attached to page 119)
September 20, 1904
“To the Selectman of the Town of Nelson NH from Perley S. Bemis, agent for C. S. Dolly.
The undersigned represent that they are about to construct, equip, operate and maintain a telephone line in the towns of Nelson and Harrisville as follows. Beginning at a line between the towns of Nelson and Harrisville where the said line crosses the road leading from Chesham to E. Sullivan thence along said road to the house of C. A. Dolly. We respectfully request your honorable body to grant a location for its poles in the town of Nelson. The above petition is granted with the restriction that it shall interfere with the travel of the road on the highway (sic).”

The Tolman & Long Pond Telephone Company 1904:
TO THE SELECTMEN OF THE TOWN OF NELSON, NH:
“The Tolman & Long Pond Telephone Company, incorporated under the laws of the State of New Hampshire, and desiring to construct, equip, operate and maintain a telephone line in the towns of Nelson and Harrisville, respectfully petition your Honorable Body to grant a location for its line of poles and wire as follows: From the line between the towns of Nelson and Hancock, east of the old Henry Wright homestead, so called, owned by A. M. Johnson, along the road from said Henry Wright homestead, so called, past the homesteads of Mrs. Horace Yardley, Charles L. Griffin, Arthur M. Johnson and Wilmer C. Tolman, thence along the road leading from the village of Harrisville to the Nelson town line; also from said road at its junction with the road to the village of Nelson, and along the same past the homesteads of Albert Sheldon, George H. Giffin, Orson C. Tolman and Wayland P. Tolman, thence along said road to the post office in the village of Nelson.

The above petition is granted.