Nelson – One of the chief items on tonight’s agenda at the Nelson town meeting will be to mourn the passing of Sidney Partridge as the town’s tax collector.

It’s not that Partridge has died; far from it. But he has resigned after 20 years of collecting Nelson taxes. As for dying, Partridge says he has no intention of doing so before he is 100, when he figures he will have eliminated the competition and will rank No. 1nationally in the ranks of Super-Senior tennis players. At 86, he is only No. 4 in New England, No. 12 in the United States. 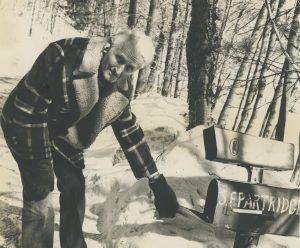 Given that you have to have one, it is rare to love your tax collector, but Partridge is cherished in his town. He once drove three miles up dirt roads to deliver a check for a 3-cent overpayment by a citizen. That matches his persistence in collecting. One local resident forgot to enclose her check with her tax bill, and by the time she got around to sending it, she owed an additional 22 cents in interest. During Partridge’s personal visit to insist she pay the just penalty, he was bitten by her dog, one of three nips he’s suffered on the job – dog-lover though he is.

Partridge and his wife, Claire, both come from Massachusetts. Claire Danielson spent her first summer in Nelson as a child in 1902. The Danielson’s stayed at the farm boarding house on Tolman Pond, run by “Ma” and “Pa” [Pop] Tolman, then rented a pond side cabin – one of the earliest such camps built in the state.

Claire’s future husband was educated in Watertown, Mass., got a two-year degree from Boston University’s School of Business Administration, and volunteered in World War I. Fighting in France, Partridge was deafened by artillery fire and has become progressively more deaf over the years. Arguing with him about taxes is not only fruitless, but requires yelling into his hearing aid.

After the war, he became an accounting executive with Gillette Safety Razor Co., then spent 21 years as a Realtor in Weymouth and Hingham. Partridge first visited Nelson in 1921, courting Claire Danielson, whom he had met at a club dance in Watertown. He claims he fell in love with her even before he could find out her name. 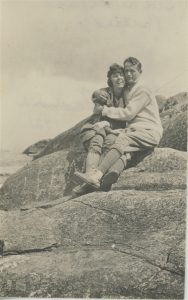 They married in 1922, restored and lived in four Massachusetts pre-revolutionary houses, and became life members of the Abigail Adams Historical Society of Weymouth. In 1957, Claire designed and they built a two-story house above Tolman Pond and moved there.

Partridge was elected town and school district auditor; immediately following the death of the tax collector, Frank Upton, Sr., he was urged into that job.

Both Partridges love nature. If he sees a strange car passing along Tolman Pond Road, Partridge will gallop down the exceedingly steep path from his front door to intercept it, warning the driver not to endanger his pet chipmunks. He sets out lobster buoys to protect the water lilies and frogs flourishing in the pond in front of his house. His major battle with his neighbors at one time was over draining a bit of swamp on his land where the cattails grew tall. And the Partridges feed birds, watch birds and know all the species.

Affection extends even to field mice, which tend to go indoors in cold weather. A familiar sight is Sidney Partridge with mice collected in his humane trap. On foot or on snowshoes, he carries them up onto the hill beyond the farmhouse to set them free. Neighbors fondly joke that the mice return home before Sidney does.

Both Partridges collect nostalgic things, penny banks and teddy bears. Two live parrots share the upstairs with them, and Claire – who is very shy, which Sidney is not – has learned from her parrots the pitch of voice that will penetrate her husband’s deafness.

Outside the front door, for visitors, is a huge ship’s bell, whose ring can be heard over the pond and throughout the house. 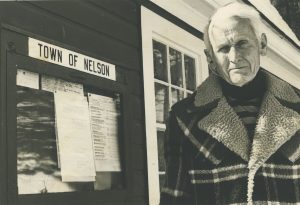 People on business rarely see Claire or the attractive rooms upstairs. The tax collector works in the “tavern room on the ground floor, at his polished antique tavern table.

On fine summer days, dressed in spotless white (matching his hair), Partridge leaves home and strides along the road to the tennis court, center of the season’s activity on Tolman Pond.

Most games are doubles; his partners are his neighbors, 30, 40, 60 years younger than he is. More often than not, his team wins. He can be as argumentative on the court as Jimmy Connors, but his efforts to make Nelson’s summer players conform to the letter of tournament law are not entirely successful.

Sidney Partridge does not know why he has kept his onerous tax collecting job for 20 years. Now he wants more time for his bird watching, chipmunk taming, correspondence with other penny-bank collectors and reading.

No doubt, though, he will continue to rise to his feet at town meetings and recite the law, down to the most abstruse footnotes, keeping the selectmen and the town lawyer on the straight and narrow.