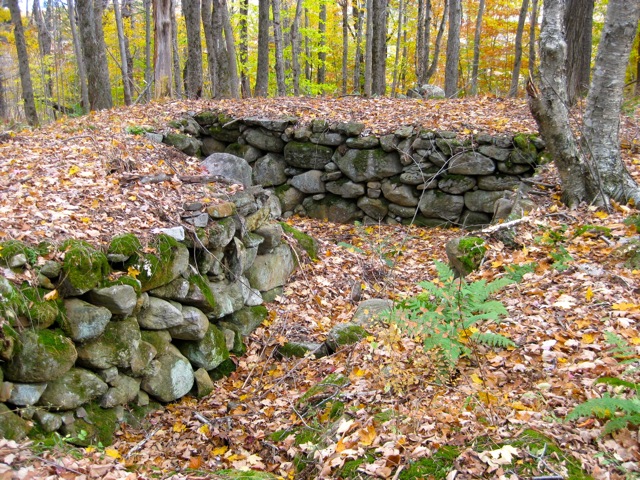 In the woods off Old Stoddard Road lies the site of the home farm of Stephen Osborn. All that remains today is an extensive array of building foundations that once housed Osborn and his extended family. The old road leading there from Old Stoddard Road bisects the building sites with some surface foundations on the right (probably a barn and a house) and the main house and a large barn attached to the house by an ell on the left. Each site has its own well. Stephen Osborn, like so many citizens in Packersfield in those days could be characterized as a farmer, everyone did that to some extent, or as a craftsman, many made or grew things to trade with their neighbors, but also as a manufacturer of finished wooden products. His enterprise made him a relatively prosperous man.

Further down the same old road, and on Bailey Brook, is the site of his sawmill. Built at the top of a waterfall some twenty-five feet high, there is a partially destroyed dam across the brook at the top of the falls. A depression in the top of the dam marks the location of a wooden sluice that once carried water to the top of an approximately 15’ diameter overshot waterwheel. The wheel was mounted on a shaft that was carried between the two large stone piers. That was connected to an elaborate system of shafts and gears to operate reciprocating saws located in a building to the left of the piers as you look down from the dam. 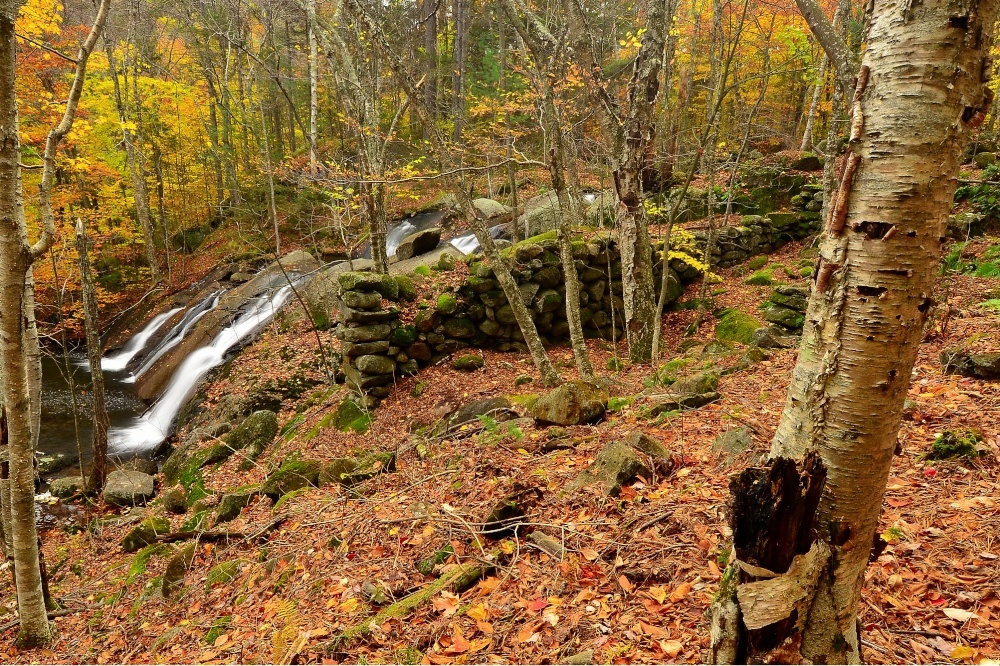 When the dam gate was closed, a small millpond was created and the water level raised so water could be diverted down the sluice to power the mill. There was not enough capacity behind that dam to store water for dry seasons. Without a substantial reservoir of water, the mill would have been too seasonal to be economically successful. Water to run the mill more reliably was stored behind a stone dam some 400 yards upstream. Water released from this dam was channeled by a stonewall along the stream bank assuring that water for sawing arrived in a timely manner and with some force. Osborn established the mill early in the 19th century.

Stephen Osborn was born in 1771 and married Rachael Baker of Marlborough, Massachusetts in 1792. They seem to have moved to Packersfield with a family of four children in 1799 or 1800. The earliest record of them in Packersfield is a tax roll entry in 1800. They were taxed for one cow. A few years later they were taxed for one half acre of tillage in addition to a few farm animals. Osborn was a modest farmer to say the least. He was not a landowner until 1815 when he bought the farm of 104 acres from Zachariah King of Danvers, Massachusetts. It is likely that he leased the farm at first and built a house on the property. Perhaps this first farm consisted of the buildings on the right of the road; the well and foundations on that side are much less substantial. The town established a road to the Osborn house in 1815 and the mill was probably built at that time.

Stephen and Rachael had seven children including Cyrus, his oldest son, and Mary, their first child born in Packersfield. Mary married Nathaniel F. Davis of Stoddard. Nathaniel’s farm straddled the Stoddard line north of the Osborn place. Both Cyrus and Nathaniel Davis seem to have lived at the family place and been part of the business. In 1827 Stephen decided on Cyrus as his successor selling him the place in return for a mortgage and a maintenance agreement for himself and his wife. Cyrus’ plans seem to have changed in 1838. Cyrus and his father terminated their agreement and Cyrus’ interest was sold to his brother-in-law, Nathaniel.

We know the site was a sawmill from the inventory of the place on the death of Stephen Osborn. When Stephen wrote his will in the spring of 1844, several months before his death, he described himself as being “feeble of body but sound of mind and perfect memory”. He named Nathaniel Davis as his sole executor. Nathaniel and his wife inherited the home place and the mill, though the mill was not specifically mentioned. Stephen’s estate contained all the usual home furnishings and agricultural implements as well as many wood working tools including 3 saws, a lot of chisels, 3 hammers, a lot of shaves, a lot of augers, a lot of bits and bit stock, a square and compasses, a lot of planes, a broad axe and two hand axes. These tools suggest the production of planed lumber including boards and beams. The augers and bits suggest that the mill had been developed to turn wood into cylindrical shapes as well.

Charles Bemis’ unpublished notes on the history of Nelson “manufactures” written in 1913 states that the mill produced tool handles including those for scythes, snathes, hoes and rakes. This kind of small turning work was common at Nelson mills with relatively small water flows producing modest power. Such a mill supplied tool handles for a much wider market than the town itself.

Stephen’s will shows that he died a relatively prosperous man owning, among other things, several dress coats, six vests (including three velvet and one silk) a suit and twelve cotton shirts. There was enough linen to supply beds for a very large family even if only half were in use at a time.

Nathaniel Davis inherited the farm and the mill. It seems to have been a going concern until at least 1858 when the official map of Cheshire County shows a sawmill at that location. It seems the mill closed sometime during the Civil War. Closure may have been occasioned by poor management, but there were numerous environmental factors working against the mill’s success. The war changed markets dramatically requiring difficult or impossible adjustments for people like Nathaniel Davis. Sheep farming was experiencing a rebirth thanks to a demand for wool for uniforms. That benefited sheep farmers and wool processors, but not enterprises like Davis’. New Hampshire hill farms, in decline since the 1830’s were hit hard by the absence of large numbers of young men serving in the Union army. The kind of farming that had supported the Osborn mill was hard hit by this manpower loss. If the mill’s traditional markets were shrinking, Davis could have turned his hand to turning work required by the war. The bigger problem was probably a shortage of raw material. Extensive land clearing had stripped the land of trees and what little wood there was fed the voracious appetite of the steam boilers at the woolen mills in Harrisville which consumed thousands of cords per year.

Evidence of the closure can be seen in the absence of woodworking tools in the inventory of the Davis estate. By the time of Nathaniel’s death in 1866, there were only farming tools in his inventory indicating that the mill was no longer in operation. Gone were the planes, carpenter’s squares, etc. that are the stock of a woodworking business. In fact the place was sold to satisfy Nathaniel’s debts. His estate inventory listed exactly $10 in cash. Twenty-fours years after his father-in-law, Davis died a man of very modest means.

His widow, Mary, lived on the place for a few years by exercising her right to one third of the estate. According to the probate records, she was entitled to “that part of the dwelling house… which includes the parlor, parlor bedroom, kitchen and pantry with a privilege in the chamber, cellar and woodshed and small barn. Said dower to be subject to the right of tenant and occupancy of the other two thirds of the house and other buildings as they now stand.” Neighbor, James Stevens, purchased the farm from the estate. 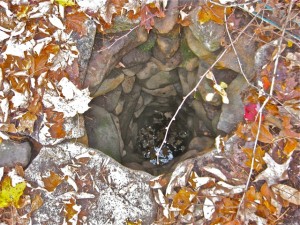 In 1870 the place was purchased by Parker Hart. He was from Hancock, Massachusetts and likely used it as a seasonal home. His widow, Elizabeth, sold the place in 1901 to Louis Cabot, a wealthy Bostonian, who amassed thousands of acres in the northeast quarter of Nelson and probably did not use the buildings personally. Elizabeth may well have lived in the house as her deed of sale describes her as “of Nelson.” The daylilies that have naturalized throughout the foundation across the road from the main house are her legacy to our generation. The sale out of the Cabot estate in 1917 was the last deed to mention buildings. The town discontinued the road to the place in 1922.

The site may be visited via the Bailey Brook Trail created by the Nelson Trail Group; the trail begins 2.9 miles out Old Stoddard Road. 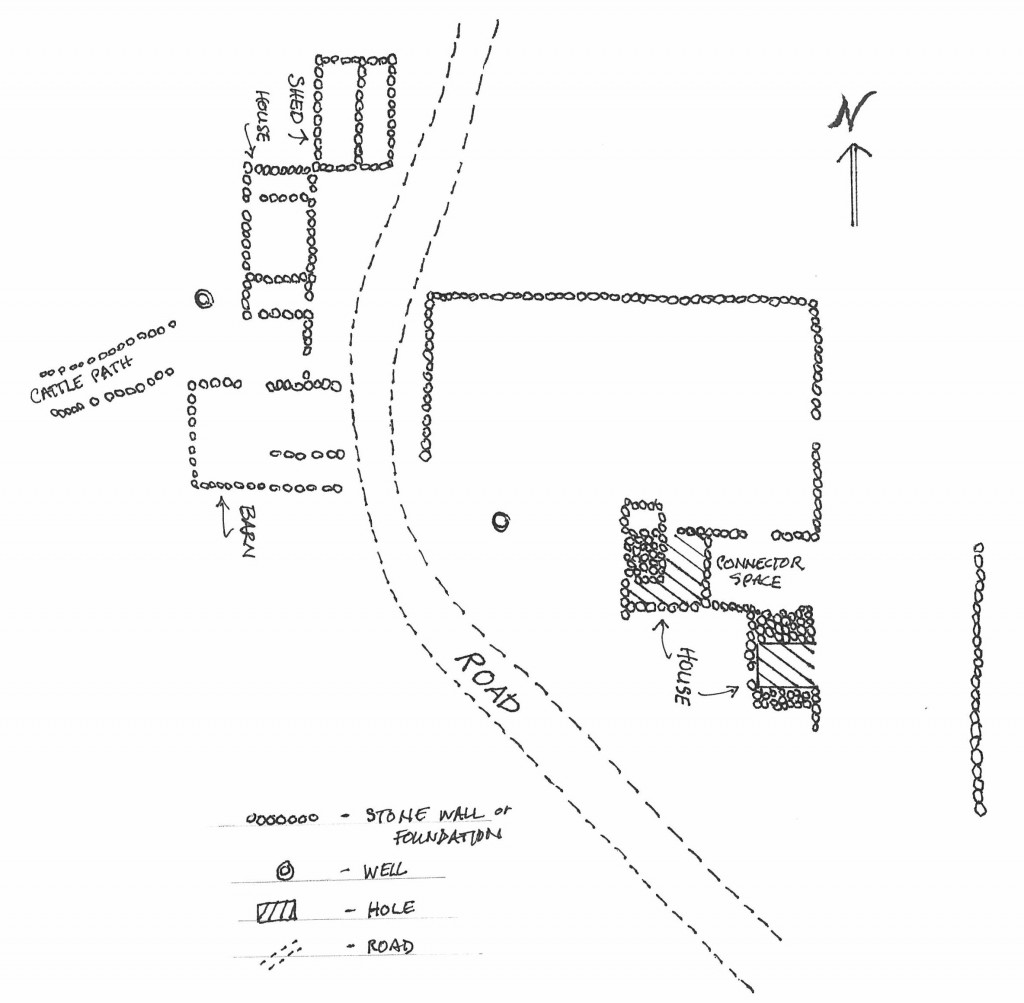 Taylor Saw Mill in Derry NH. This is an example of an early nineteenth century saw mill similar to the Osborn Mill. 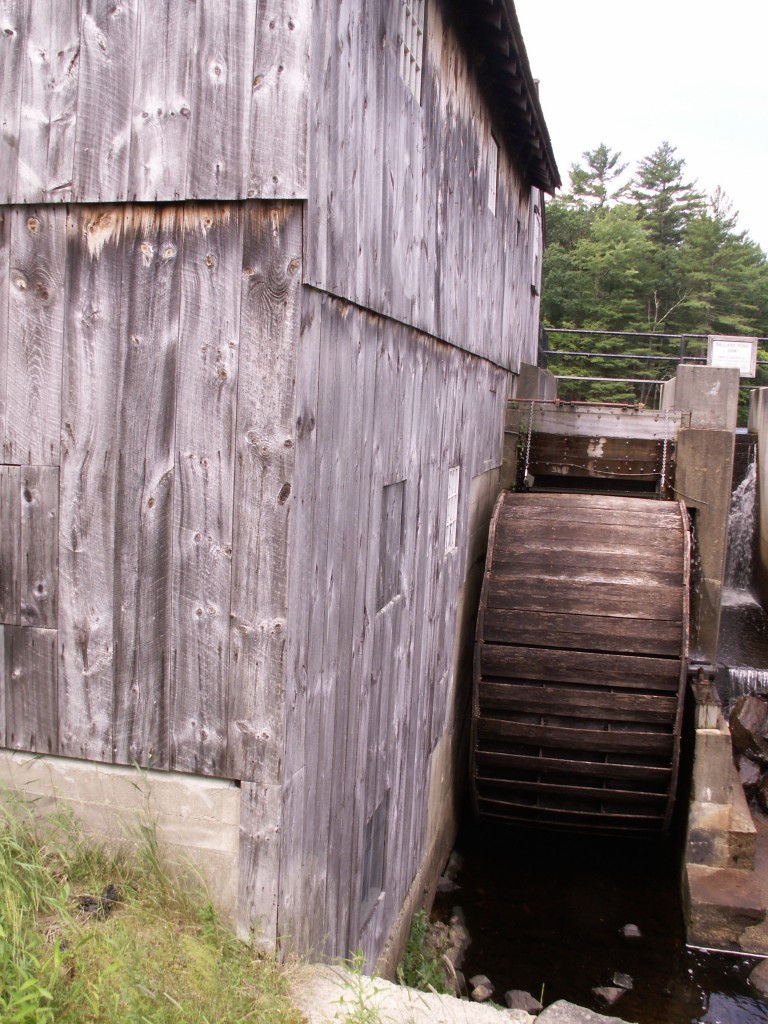 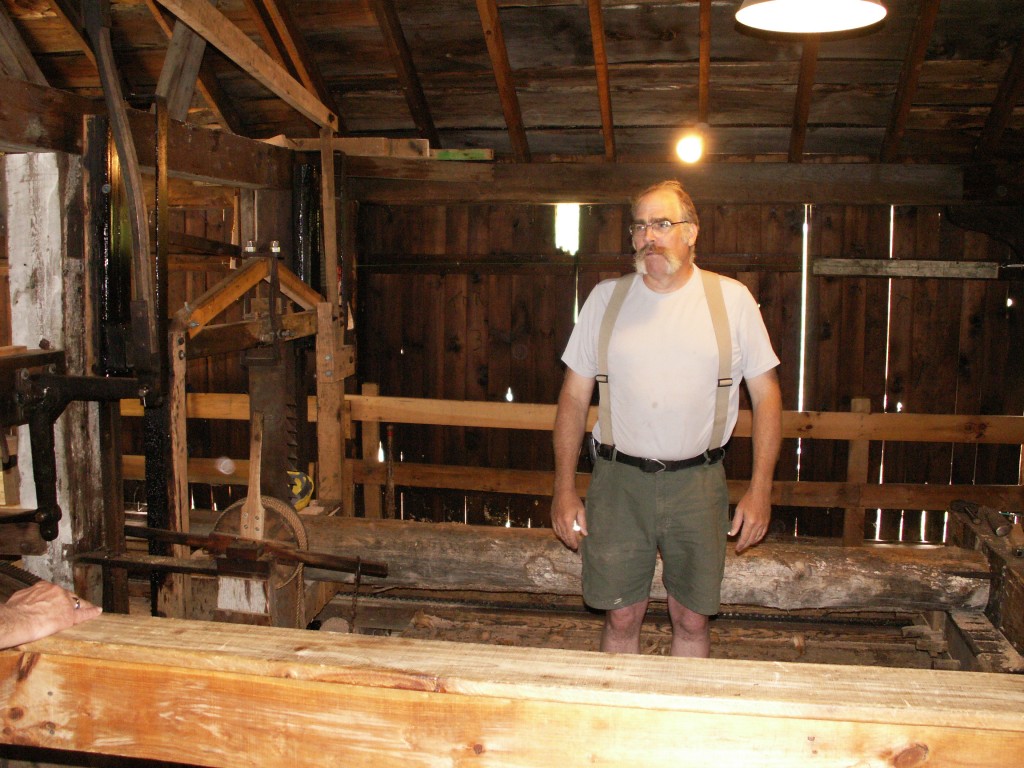