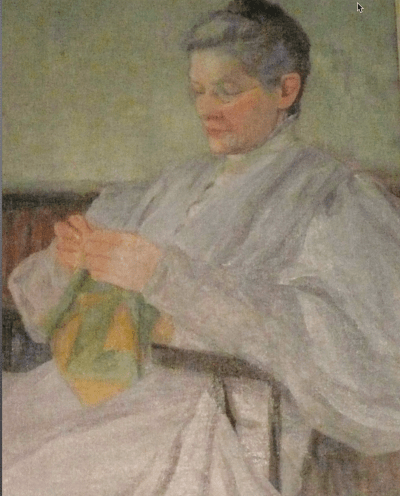 Miss Rodham’s home was located on Lead Mine Road. Now known as 5 B Farm, later owned by Bruce White. Miss Rodham refurbished the barn on the property into living quarters she called “Head­long Hall.” Subsequently, at least two of the colonists followed suit: both Professor Rolfe and Marie Spaeth converted their barns into additional living quarters. Sadly, Headlong Hall no longer exists. In the 1950s it was struck by lightning and destroyed.

Olivia Rodham was born in 1845 in Belaire, MD, to a Quaker family. There she was raised and there she cared for her father after the death of both her mother and sister until a growing estrangement — we do not know what caused it — prompted her to abandon the only home she had known. One night, penniless and alone, she fled to a neighbor’s house. She found work at Swarthmore College where she became Assistant, and later Acting, Librarian. Miss Rodham came to Nelson in 1891, just one year after Swarthmore award­ed her an honorary B.A. Soon thereafter, several of her friends followed.[9]

Much of what we know about Olivia Rodham comes from Olivia Rodham, a pamphlet written by Robbins Milbank (1903-1985) and published by the Olivia Rod­ham Memorial Library Trustees in 1964. Milbank, a Mayflower descendent,[10] had gone to live with Olivia Rodham at the age of seven, and stayed with her for nine years. With her he discovered a new life: reading the classics and learning Latin as well as peering under logs to find the rare plants Miss Rodham could always identify. In Olivia Rodham’s later years she stayed with Milbank and his family in New York during the winter months.[11]. 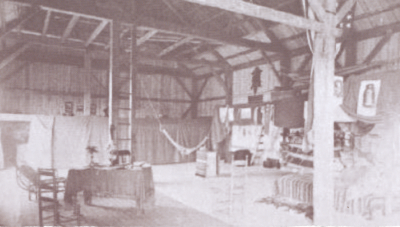 Robbins Milbank went on to graduate from Princeton University in 1925. He worked as a logger in British Columbia for three years, and then went to work for McCann-Erickson, the global marketing communications company, where he worked as an advertising executive and rose to become a creative vice president and West Coast director. [12] Later, he wrote docudramas for television,[13] and he did fundraising for Princeton and for the Episcopal Cathedral in San Francisco.[14]

Milbank married his childhood sweetheart, Mary Lightfoot (1902-1952), daughter of Pennsylvania Settlement colonist Thomas Montgomery Lightfoot; they lived at Schoolhouse Farm in Nelson, and at their other homes in California and in New York. After his wife’s and father’s deaths, the grieving Milbank wrote an essay, “Thy Will Be Done,” which aired originally on the Edward R. Murrow TV series titled “This I Believe” in the 1950s. The essay was rebroadcast on the Bob Edwards Show, October 30, 2009, as part of a revival of the “This I Believe” series. Despite Milbank’s sor­row, his strong religious faith helped him maintain his equanimity and, as he wrote in his essay, to “live with what he had, and to live without that which was taken away.”[15] Milbank’s knowledge and skills were tempered by his love and appreciation for the simple, the unadorned. He valued the beauty and power of nature and sought to preserve the character of Nelson. In 1954 Robbins Milbank remarried. His bride was Helen Kirkpatrick (1909-1997), a journalist who had had a remarkable career. After graduating from Smith College in 1931, she did post-graduate work at the University of Geneva in Switzerland, setting the foundation for her illustrious career.

Between 1935 and 1937 Kirkpatrick worked in Geneva and England. During that time she was a writer, then editor, of Research Bulletin published by the Foreign Policy Association; research assistant for the Geneva Research Center (Foreign Policy Association) editing their ‘Geneva: A Monthly Review of International Affairs’; and correspondent for the New York Herald Daily Telegraph. Together with Victor Gordon-Lennox of the Daily Telegraph and Graham Hutton of the Economist she started the weekly Whitehall NewsLetter, which analyzed the current state of European affairs. She was diplomatic correspondent for the London Sunday Times in 1938 during the Munich Crisis. Kirkpatrick expanded her views into two books, This Terrible Peace (1938) and Under the British Umbrella (1939).[16]

As the war approached, Helen Kirkpatrick was connected to the London office of the Chicago Daily News, and there is a story about her tenure there that is both amusing and revealing of the sort of woman she was. In her interview at the Chicago Daily News before she was hired, Frank Knox, the paper’s editor and later Roosevelt’s Secretary of the Navy, explained to her, “We don’t have women on the staff.” She told him, “I can’t change my sex, but you can change your policy.” Knox did not change his policy; he simply made an exception for her.[17]

Kirkpatrick is considered one of the first and best American war correspondents of the Second World War, and was always at the forefront of the action. Her bravery and accomplishments were widely recognized. She was awarded the French Medallion de la Reconnaissance in 1945, the U.S. Medal of Freedom in 1947, an honorary degree from Smith College in 1948, and the Rockefeller Public Service Award in 1953. [18] She is one of the remarkable women featured in Nancy Caldwell Sorel’s 1999 book, Women Who Wrote the War.[19]

Helen Kirkpatrick Milbank remained very active, serving on several national committees and boards after her retirement. Both Milbanks were active in Nelson politics and cared deeply for the town and its future. They were active in the Nelson Community Association and helped to begin the process of planning for Nelson’s future, strongly supporting planning and zoning guidelines. They were instrumental in getting the first planning regulations passed in Nelson and encouraged the writing of the first Master Plan for the town. Helen Milbank started the Nelson Conservation Commission, one of the first in the state, and went on to serve as president of the New Hampshire Association of Conservation Commissions. Robbins Milbank served the town as a selectman and later served in the New Hampshire state legislature.

In 1964 Robbins Milbank wrote Olivia Rodham, a tribute to his childhood mentor. In it he summarized her character and accomplishments:

She was a woman of unusual culture and schol­arly attainments, enriched by extensive travel and residence in many lands . She pursued advanced studies in botany in Cambridge and Berlin, and was well known to American botanists for her intimate acquaintance with the flora of the United States.

She was extraordinary, a character of strong faith, conviction, wisdom and compassion. Like a lovely light, she drew to her a world of friends: writers, poets, scholars, teachers and the people of the village where she spent the last twenty-nine years of her life. She gave them assurance of the existence of goodness and the beauty of truth. They came to her in times of joy and in times of bitterness and were rewarded. They came because she was fun to know.

She was a woman possessed of intense curiosity, a curiosity which led her to the study of botany, the study of medicine, the study of Latin and Greek, the study of literature and the collection of books. In each endeavor, she became a master, acknowledged by her peers. She published pamphlets on botany, she assisted in the preparation of a medical dictionary, she aided other lexicographers. Her knowledge of literature was rich and varied and is reflected in her collection of books, which formed the original basis of the library erected in her memory. [20] When she died in 1920, a large quartz rock was moved from her place to her grave in the Nelson cemetery. The bronze plaque on it reads: “A music heard by thee alone To works as noble led thee on.”[21]

Olivia Rodham’s many accomplishments were not­ed also in an obituary in the Friends’ Intelligencer: “Her familiarity with ancient and modern languages found her employment in lexicographic work, in which field her services were greatly appreciated by editors and publishers.” [22] Milbank’s Olivia Rodham makes clear to us why those who were accomplished scholars and exceptional artists themselves came to join her in Nelson.

In fact, Olivia Rodham’s extensive personal library was the inspiration and the foundation for Nelson’s Olivia Rodham Memorial Library, constructed after her death. Pamela White, granddaughter of Robbins Milbank and Mary Lightfoot Milbank, and step-grand­daughter of Helen Kirkpatrick Milbank, wrote recently in “New Life for the Old Library”:

It [Olivia Rodham by Robbins Milbank] is the story of Olivia Rodham, whose life inspired the library’s creation and purpose, and the group of citizens who brought the library into being in 1926. These include Nelson patron Henry Melville, who donated the land, Nelson summer resident Mary Elliot of the Keene Elliots, who conceived and carried through the plans to build the library; her son-in-law (also a summer resident of the town), Boston architect Alec Law, who designed it; Homer Priest, who built it; and Margaret Redmond, who later did the stained­ glass windows.[23]

Today the original library building created in honor of Olivia Rodham is privately owned. Wallace Fran­cis, son-in-law of Alec Law, the architect who designed the building, has begun the process of refurbishing the building to preserve its structure and enable its use for a conservation center or similar public purpose in the near future. As Pamela White so aptly puts it, “She [Olivia Rodham] is drawing new friends, still. They are stepping forward now to ensure the future, and the story of the little building on the hill will continue.”[24] So the descendants of those who were befriended by Olivia Rodham and helped to create the library in her memory are the same who have spearheaded this building renewal. It is a testament to Olivia Rodham, her character and the pursuit of knowledge she inspires even to this day.