There is no trace of this house today. From road and property records we know its approximate location on the old road to Hancock a few hundred feet east of Nehemiah Wright’s cellar hole. The foundation was, likely destroyed when the house now occupied by Mary and Dennis Dellagreca was built in the twentieth century.

Brothers, Nehemiah and Oliver Wright grew up in Dunstable. In those days Dunstable straddled the Massachusetts/New Hampshire border where Dunstable, Massachusetts is today. Dr. Ebenezer Starr also lived there; he was the owner of some 700 acres in the southeast quarter of Packersfield. The Wrights bought 100 acres (known as the David Cook Lot) from Dr. Starr in 1782.  They built houses and shared the lot each buying adjoining pieces over the years.

Oliver served with his older brother, Nehemiah in the Revolutionary War around Boston and New York. In 1778 he married Martha Dunster; the couple and moved to Packersfield in 1782. Their ten children were born in Packersfield. Martha died in 1838 and her husband in 1846. They are buried in the village cemetery.

Their son, Henry succeeded them on the farm. He married Lois Kimball in 1821 and had eleven children. The removed to Clinton, Massachusetts sometime after Oliver’s death. The last occupant of the place was Richard Razey who was there in the 1850’s. 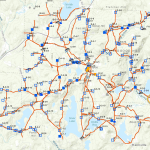