This is one of the older sites in Packersfield. Note there are two cellar holes at this location about two hundred feet apart. One is small and, clearly abandoned many years ago. Built originally by Benjamin Nourse (also Nurs or Nurse) who came in 1772, they may have been inhabited by father and son with the older one abandoned early.

Benjamin Nourse was born in Reading, Massachusetts in 1716 and moved to Packersfield from Hubbardston, Massachusetts at the age of 56.  His son followed soon after. Both men signed the Association Test in Packersfield in 1776. Both saw service in the Revolution.

Benjamin SR moved to Littleton, NH where he died in 1806. He was followed on the place by his son, Benjamin Nourse Jr. He moved to Keene where he died in 1841. He was succeeded Amos Child JR in 1800. It was probably Amos who built the newer, larger house there. Amos died at age 28 leaving his wife, Naomi and two children. She sold to Esek Phillips in 1805 and eventually went to live with her son Jonas at D-3-14.  Esek he sold the farm to his nephew Washington Phillips (Son of Reuben) in 1858.  Calvin Smith acquired the place next. He sold it to George A. Hall in return for support for life and moved with the new owner to his home at the outlet of Woodward Pond (B-2-5). The home was abandoned around 1870. 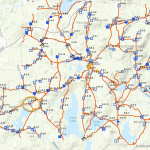