This modest cellar hole is difficult to find being more that 100 yards west of an old road abandoned in 1828.  Born in Templeton, Massachusetts in 1771, he moved to Packersfield in 1796 and married Lydia Felt that year. The couple probably lived with her parents, Jonathan and Martha Felt, at D-5-6.  They welcomed their first child, Lydia, in 1798.

In the following year they established a farm on 50 acres here building a small home. They had five more children here. In 1813 they sold the farm to Pious Upton Burnap and half a mile north to C-3-1. There they added three more. Burnap did not live here, but farmed the land Noah had cleared. The place may have been inhabited until 1828 when the road was abandoned.

At Pious Upton Burnap’s death the land was added to Henry Dodge’s farm. 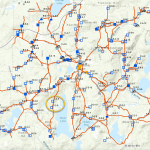