Everyone in New Hampshire knows that there are far more than four seasons. There are sub-seasons, mini-seasons, seasons that hide in the woods, and seasons that last for just a day.

Most of these seasons happen in that vast, slushy tract of time between February and May when all life seems to hover indecisively between late winter and early spring. My grandmother calls them “mongrel seasons,” the bastard children of winter and spring, neither one thing nor the other.

There’s maple sugaring season. With the advent of plastic tubing, the woods have started to look like an outdoor intensive care unit, with all the patients on life support. What I miss most about the old-fashioned way of sap-gathering is standing on the road and listening to the steel band start up, as each drop of sap hitting the bottom of the bucket sounds a different note.

But, never mind. If it saves the back, nostalgia has to come second. All those old-time Yankees collected sap in wooden buckets, which hung from yokes across their shoulders. I’m sure that as they struggled from tree to tree on snowshoes, with sap sloshing over their heavy woolen pants, they would have wholeheartedly endorsed everything from plastic tubing to polartec fleece.

My great-uncle Newt Tolman, an all-purpose, freelance genius-about-town, was very creative in coming up with such labor-saving devices. During sugaring season one year, he grew tired of standing up while he attended the boiling through that delicate stage when sap is just thickening into syrup. He found an old couch, and suspended it from the rafters of his sugarhouse. There he reclined, five feet in the air, a genie on his magic carpet, sipping toddies, receiving guests, and stirring the sap with a long-handled spoon.

It becomes very important to save your back, because you will need it as a shock absorber, because overlapping with sugaring season is cabin-fever season. If you live on a dirt road, and you aspire to leave the increasingly narrow confines of your home between February and May, you have to navigate rutted quagmires with ice at the bottom. Mud season! Once you’re through the mud and on the tar road, then you’re faced with the cracks and fissures, the humps and bumps and sinkholes known as frost heaves.

Frost heaves occur when the water trickles into cracks in the road and freezes, pries them open, making them bigger, gets under the road into the loose sand, freezes it. Frost heave season begins the first time you bang your head on the ceiling of your car, and lasts through multiple trips to specialists who have to realign your car and you, front end and back.

The only modes of transportation really up to the challenges of mud and frost heaves would be either a Conestoga wagon with a brace of oxen or a 1972 Cadillac. The back roads of New Hampshire are littered with the bleached bones of sport utility vehicles.

In New Hampshire, we laugh at the television ads featuring yuppies climbing sheer rock faces in their four wheel drives, because they need to be on top of Devil’s Tower in Arizona in order to enjoy a can of Mountain Dew. We think they’re sissies. At this time of year, the only thing that would impress us would be taking on the Silver Lake Road through Chesham in a VW Rabbit going more than ten miles an hour.

It is a long time between February and May, and it is easy to lose hope. Faced with the endless, naked gray of ice and sky and woods, we wonder, will spring ever come?

Sometimes it takes the eye of an artist to mark the subtle, daily shifts of season. The best renderer of “the mongrel season” was Albert Quigley, a painter who lived in Nelson. He looked at the bare hillsides and in his palette found the first stirrings of lavender, purple and even gold that all that gray contains.

This should give us hope, because that color combination will inevitably explode into green. 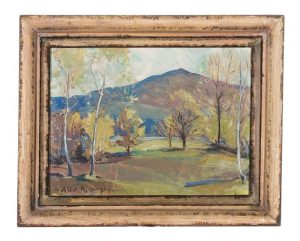