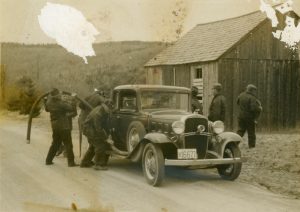 These photos show Nelson’s first fire “truck”, a 1931 Chevrolet Coupe donated by Catherine Robinson about 1939 or 1940. The Nelson Volunteer Fire Department mounted a siren on the hood, and cut out the rumble seat to make a pick-up bed for carrying hose and a portable pump. Gordon Tolman (Ethan’s father) founded the volunteer squad with several other men in town, and was serving as fire chief at the time.

That’s Frank Upton (below) standing behind the pump. Frank said most of the fire calls were for grass fires and small forest fires, with house fires being quite rare. It took two men to carry the pump over smooth ground, four if the terrain was rough. “The pump ran regularly – about once a year,” recalled Barry Tolman.

The photographs were taken near the barn that stood behind the Quigley house (site of the new Olivia Rodham Memorial Library) in the center of town. 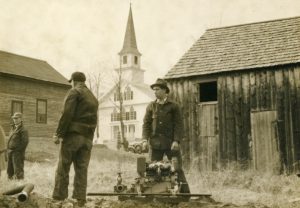 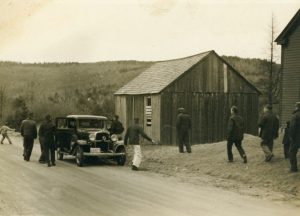