According to Parke Hardy Struthers’ History of Nelson, Simon Griffin was born in Nelson on August 9, 1824, the son of Nathan and Sally Wright Griffin. The Nathan Griffin family lived on Center Pond Road about a mile from the village. Simon Griffin’s grandfather, Samuel, had fought at the Battle of Bunker Hill before coming to Nelson in about 1779 and settling at the top of Dixon Hill (where Al and Lindy Black now live). 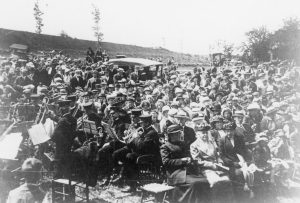 Young Simon attended Nelson District No. 1 School and became a teacher at age 18. When he was 26 he married Ursula Harris of Nelson, but she died shortly after giving birth to a son, and the baby died in infancy. After this bereavement Simon began the study of law, and represented Nelson in the State legislature for two years. He was admitted to the bar in Merrimack County in the fall of 1860, just as the war broke out. He promptly volunteered as a private, was elected captain of his company, and was mustered into service in June 1861. Captain Griffin’s company fought at the first Battle of Bull Run. He served throughout the war, being promoted to major-general for “gallant conduct” at the attack on Petersburg, Virginia, April 2, 1865, just before the end of the war. General Griffin lived in Keene after the war and died there in 1902.