The site of a house built in about 1817 by Nathaniel Parker. The current house on the site is a renovation of a barn on the original place. The old home stood between the current house and the well.  The original home burned sometime in the early 1950’s.

Jonathan Lovejoy sold 95 acres of his farm here to Nathaniel Parker and he built the house. Born in Rockingham, Vermont in 1791, Nathaniel married Theresa Osborn, daughter of Stephen and Rachael Osborn (D-5-10) in 1824. The couple had four children here before selling to John Stone and moving to D-2-10.

After fire destroyed the original house in the 1950’s, the barn was remodeled into a house by Carl and Ruth Lape. It is currently owned by Bill and Judy Waterston 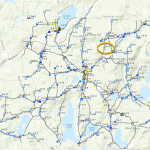