“My Defiance to these Traitors …”

“My Defiance to these Traitors …”

“MY DEFIANCE TO THESE TRAITORS, TO OUR COUNTY, ITS LAWS AND INSTITUTIONS, ITS IDEALS AND TRADITIONS, IS WAVING IN THE BREEZE” 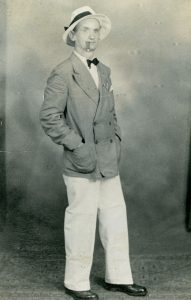 The misconduct of public officials is hot stuff these days. In the past, there were newsmen who searched out and wrote up scandals. They were “muckrakers.” And right here in Nelson, back in the thirties and forties, we had our very own muckraker––“Jack” ––William J. Sherrard.

When Jack wasn’t tending the animals in his rabbit factory (first located in the substratum of the old Munsonville brick mill) or working as a house painter, he dedicated himself to the art of hunting down miscreants. Sifting through old records of land grants, noting changes in town roads that had become either county or state roads, he nosed through convoluted legalities pursuing any possible error. Having pinpointed one, his next step was to write up charges right and left. He spared no one, accusing the Selectmen, Town Lawyers, the Moderator, the Town Clerk, all of Treason, Felony, and Graft. Fearless in his denunciations, he pulled no punches above or below the belt.

“Falsification of Town Records to avoid Payment of Taxes,
and also to cover up misuse of Funds and other Corrupt Practices.”

At every Town Meeting there was Jack in the back of the Hall, waiting for his moment in the sun. When it came he strode to the front, facing us––tall, shabby, dignified and fierce––and proceeded to blast us all for allowing the Selectmen to get away with Outright Corruption.

“Let them stay and stew and wallow and stink
in their mental filth and damnation ignorance.”

“If these damned ignorant fools of so called Selectmen
were not lost to all sense of Shame, Honor or Decency
they would proceed to Concord and apologize
for their detestable practices as expressed in this
richly deserved and fully warranted scathing indictment.”

Just what were these acts of corruption? What muck did he actually rake up? This Jack was not about to reveal. It was, apparently, classified information that he had no intention of giving away. He dealt with hecklers or with anyone who dared to question his facts by reaching into a pocket and bringing out a sheaf of tattered papers. Holding them aloft he announced in a voice like a battering-ram, “Here it all is––you can see it Right Here––material proof which is about to be presented to the Attorney General of the State of New Hampshire!” In the following silence he would stalk out of the Hall.

“Must I always act as
School Teacher free gratis?”

He stunned us with his fiery histrionics. His letters were masterpieces. Occasionally he included notes to himself. “You stuck them all up Sherrard with your clever strategy.” And again, “You gummed them all up like flies on fly paper in their ignorance and damnation stupidity.” And always written in a flourishing script, works of art––memorials to a crusading spirit, to a Muckraker with style to spare?

(Quotations in italics are taken from letters written by Jack Sherrard.)