Martin Lawrence, a cordwainer by trade, and his wife Sally moved to Packersfield in 1794, buying 35 acres of land and a modest house from Timothy Pierce at C-5-2. Two years later he bought 100 acres to the south and across the road. He constructed a much more substantial home and turned his attention to farming the 100 acres that was lot number 2 in the 11th range of the Northeast Quarter of the town. He sold the property at C-5-2 and an undivided half interest to his son, Jesse in 1809 and Jesse sold the place to Samson Robins (1818) and moved to Ohio. Sally died in 1813 and Martin in 1822; they are buried in the village cemetery. It is unclear where Lawrence lived from 1818 to 1822. Samson Robbins moved to Jaffery. Moses Bairsto (Barstow, Baristo) bought the place and lived there until 1828 when he sold it to George Dodge. The house was abandoned then. Today the large, well preserved cellar hole is on the south slope of Tolman Hill about 100 yards east of road #47 (discontinued in 1868.)

Parke Struthers has Abram Barstow living here in about 1800 and succeeding Martin Lawrence. There are no deeds on record for Abram Barstow. 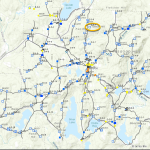