See the complete book, The Pennsylvania Settlement.  from which this is one chapter. 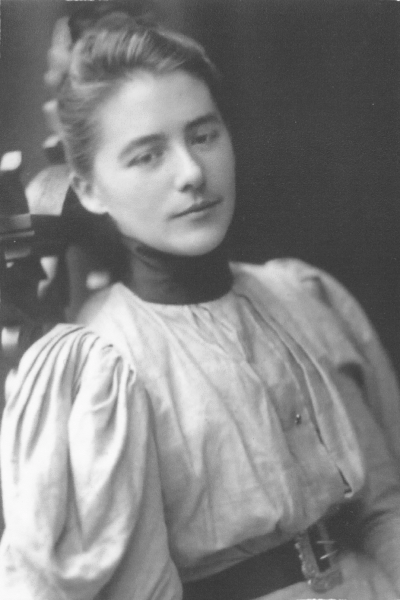 Miss Redmond was a painter and stained glass artist; she moved to Nelson in 1904. Her former home is located off Blueberry Lane, north of Dr. Egbert’s place. After her death, ownership passed to Helen P. Burns, Miss Redmond’s cousin, and then to her nephew, John Barton Armstrong, a history professor at Boston University and the author of Factory Under the Elms, A History of Harrisville. The property is now owned by a descendant, B. Barton Armstrong.

Margaret Redmond was born in 1866 in Philadelphia. She was a student at the Friends School there before studying at the Pennsylvania Academy of Fine Arts. She attended the Harvard School of Architecture in 1890, MIT in 1893, the Art Students League in New York, and the Academie Colarossi in Paris, an alternative to The Ecole des Beaux Arts, which was considered very conservative even in the 1890s. The Academie Colarossie was more liberal in philosophy and it admitted women. In Paris Miss Redmond studied with John Henry Twachtman,[79] an American, and Marie Auguste Emile Rene Menard (1862-1930) and Lucien Simon (1861-1945), two well-known French painters. In Boston she studied with Charles J. Connick, a prominent stained glass artist of the period.Miss Redmond worked with Mr. Connick for a time early in her career, but later left and opened her own studio in Boston’s Back Bay.

We have a personal glimpse into Margaret Red­mond’s life here in Nelson, in a wonderful story told by Bruce White, a long-time Nelson summer resident, and childhood neighbor of Margaret Redmond. In the 1930s, when Mr. White was between five and seven years old, he wandered off Blueberry Lane into Miss Redmond’s garden. Perhaps Miss Redmond had not been able to come to Nelson for a while, for the gardens were totally unkempt, an absolute jungle of roses and ferns and all sorts of weeds.

As he stood staring he was startled by Miss Redmond, who was in the garden where he had not seen her. “Are you lost, young man?” “No,” he replied, “just out for a walk.” After introductions he told Miss Redmond that he could help her take care of all these weeds.

According to Mr. White this was the beginning of a lovely summer, and for two and a half months he spent mornings, four to five hours at a time, three days a week, weeding and caring for Miss Redmond’s gardens. “Miss Redmond would appear silently at my shoulder and comment on how quickly and well I had cleared out the weeds, rocks and all.” Mr. White says that Miss Redmond was gentle and kind, and treated him to goodies and something to drink. He earned 25ct per hour for his labor. With a few dollars in his pocket at the end of the week, he was very proud indeed. Although he didn’t see much of Miss Redmond after that summer, his time with her remains a happy memory of his childhood in Nelson. And perhaps the beautiful flowers we see here in Margaret Redmond’s paintings of her gardens are due in part to the efforts of young Mr. Bruce White and his summer helping Miss Redmond.[80]

Margaret Redmond worked in a variety of media. She created both decorative wooden screens and fireplace screens. She was an accomplished watercolor­ist[81] who also painted in oils and pastels, and she also made etchings. However, she is best known for her stained glass windows, most often for churches and public buildings

In the Monadnock region Miss Redmond created a medallion window for Elliot Community Hospital, now Elliot Hall at Keene State College, two windows in the Olivia Rodham Library in Nelson, “King Arthur” and “Sir Galahad,” and a window in the Lady Chapel at All Saints’ Church in Peterborough, titled “Isaiah.”

Visitors to Boston can see five of Miss Red­mond’s windows, all in the medieval style, in Trinity Church. Two, “Wisdom” and “Worship,” are located in the vestibule and depict events in the lives of Solomon and the Queen of Sheba. Three are in the lower nave walls of the church. The subjects of two, “Apostles” and “Evangelists,” are evident from their titles, and the third, “Vision and Service,” depicts events in the life of David and Samuel. Margaret Redmond also created six windows for St. Paul’s church in Englewood, NJ, and others for churches along the East Coast.

The Boston architectural firm of Ralph Cram[82] was chosen to design All Saints’. On previous occasions Margaret Redmond had requested that Mr. Cram consider her to design windows for his many churches. She was denied on the grounds that “a woman’s place is in the home.” Although she is­sued a formal complaint, it is not clear if she received a response.

The Stained Glass of All Saints’, published in 2001 by the All Saints’ Parish, gives no clear indication of how the artist received the commission to create the Isaiah window. Was her association with the donor, Margaret Hillyer Pierson, an influence? We do not know. Consequently, obtaining this commission would have been no small achievement. Although the theme was chosen for Miss Redmond, she was able to express her independence and freedom openly in its execution. The Isaiah window uses large pieces of glass, letting in more light, and it is both distinctive and different in style from the other windows in the church, which were all done by the Charles Connick Studios. The Stained Glass of All Saints’ is dedicated to Ralph Adams Cram, Charles Jay Connick, Mrs. Mary Ward Lyon Cheney Schofield, The Reverend Lewis S. Stone, and “All the saints and sinners.” Connick’s name on the dedication page is followed by the statement that he “filled [the church] with the silent music of stained glass,” but there is no mention of Margaret Redmond’s work. Nor is she included in the biographical section, where biographies of Cram, Connick, and Schofield ap­pear.[83]

The windows pictured here, “King Arthur” and “Sir Galahad,” are the windows Miss Redmond created for the original Olivia Rodham Memorial Library. They were later relocated to the new library in Nelson. (see larger images in the gallery).

As a young woman Margaret Redmond studied modem stained glass methods with John Lafarge, an American painter and stained glass artist. However, in her travels through Europe and her studies with Charles Connick, she fell in love with medieval stained glass windows and the process used to create them, a process she adopted for her own work.[84]

It is easy to understand why she was fascinated by this complex and time-consuming technique. Eliza­beth Prudden, in an article titled “History Written in Glass,” published in The Christian Science Monitor in 1931, describes the process from an interview with Miss Redmond. First, the artist drew the window to size, numbering each segment. A duplicate was then made and cut up to serve as the pattern from which the glass was cut. Next each piece of the mosaic was fastened in place with beeswax onto a sheet of plate glass and the whole put on an easel where it could be worked. Margaret Redmond used only Norman slab, the finest of all English glass, which comes in colors as beautiful as any used by the old masters. It is very expensive and comes only in small pieces. No two pieces of the same color are the same shade.

Each single piece has to be stained, Miss Redmond explains. Otherwise the effect would be crude and flat. The design is first outlined with ground oxide blended with oil and varnish, and the whole piece then covered with a mat of the same oxide mixed with water. After the lights and halftones have been picked out by removing the mat with brush or needle, the glass is fired. When every fragment has been colored to Miss Redmond’s satisfaction, the glass is reassembled and leaded with H-shaped strips of flexible lead. The whole is then soldered together and mounted upon an armature or iron frame, and the window is ready to be placed in its final posi­tion.[85]

During her lifetime, Miss Redmond’s work was quite widely recognized. It was included in many exhibitions, notably at the Art Institute of Chicago, the National Academy of Design, the Pennsylvania Academy of Fine Arts and the Society of Independent Artists. Perhaps most significantly, at the Boston Tercentenary Fine Arts and Crafts Exhibition in July 1930, she received their highest award, the Tercentenary Gold Medal for stained glass. The pieces she showed at the exhibition were a small medallion study from Mother Goose Rhymes and a medallion, “The Three Marys at the Tomb.”