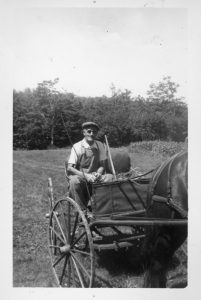 I had a great uncle named Bill French, a tall, raw-boned old Yankee, who worked around my grandfather’s farm. Generosity was his virtue and his pleasure, and nothing so delighted him as going to country auctions from which he would return with a truck load of booty to bestow upon his friends or to donate to the farm. However, his generosity didn’t extend as far as the auctioneers or fellow bidders; he had a keen eye for a bargain. Good buys proved so irresistible to him that my grandfather’s barn was crowded with old ice boxes, boxes of miscellaneous bits of scrap iron, and chamber pots; and the barnyard collected all species of horse-drawn vehicles. When Uncle Bill and my grandfather died, the farm died as well. The machinery was sold, and the old ice boxes thrown away. Only one item that Uncle Bill had purchased at auction, his favorite, was kept: the cider mill.

October was cider time. When the winter squashes had been harvested, the carrots and potatoes had been snugly bedded against winter frost in the root cellar, and the cows brought back to the barn from summer pasture, out came the cider mill, powdered with the dust and laced with the spider webs of a year’s disuse.

The farm was ransacked for bushel baskets in which to gather apples and gallon jugs to receive the finished product. Uncle Bill would recruit several of us kids to pick apples and to help with the grinding and pressing in return for some cider. Old Jim, the little Morgan work horse, was hitched to the wagon and off we went to the Old Johnny Dixon place to pick apples. Uncle Bill was never noted for his patience, and the prospect of cider making didn’t increase it a bit. Old Jim, the unhappy recipient of a lot of light whipping and heavy cursing, pulled the springless wagon over the cobbled dirt road so fast that I was afraid that my teeth would rattle loose. 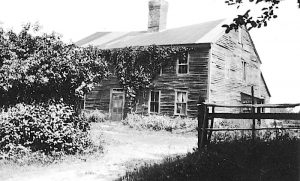 Johnny Dixon must have loved apples because around the cellar hole where the house had stood was a large orchard of apple trees of many varieties. There were several Baldwin trees, loaded with apples that wouldn’t ripen until December but which made good, if not sour, cider. There were fiery red Astrakhans which made cider as red as beet juice, several varieties of green cooking apples and a scattering of trees which bore tiny, sour wild apples. We kids climbed the trees to start a shower of fruit. Half a dozen bushels were gathered to provide an afternoon’s work for the mill. 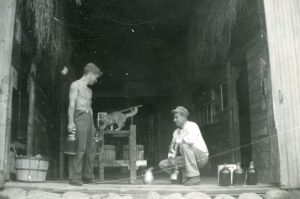 One person could operate the mill alone, but it was better to have three. At one end of the mill was a crank which turned a heavy, flat cast-iron wheel about fourteen inches in diameter. Arranged around the wheel were rows of small teeth that would ground the apples to pulp as they were fed into a funnel-shaped opening at the top of the wheel. The idea was for one person to turn the crank as fast as possible to provide enough inertia to prevent the apples from binding while another dumped handfuls of apples into the hopper above the wheel. Centrifugal force threw the apple pulp from the bottom of the wheel and into a burlap bag stretched within an open-ended cylinder of spaced oak slats. At the opposite end of the mill from the grinding wheel was a hand-operated screw, which a third person could operate while the grinding was under way to press a second burlap sack full of pumice, as the ground apples are called. The new cider, which poured out light-colored but darkened second after contact with the air, was then strained through cheese cloth into gallon jugs. 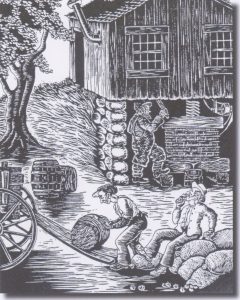 Uncle Bill, of course, turned the crank. The heavy gears that made the grinding wheel turn half a dozen times for every revolution of the crank, growled louder and louder as their speed increased and the apples were fed into the hungry jaws of the mill. The din was so loud one had to shout to be heard above it. The noise seemed to have a tonic effect on Uncle Bill because he would yell at the person feeding the apples to “put ‘em right to her” even though the hopper was already full, or perhaps he yelled out of sheer exuberance. His unrealized ambition was to grind faster than the apples could be fed into the hopper. Five minutes of frantic grinding filled the burlap, and Uncle Bill would wipe his brow and swear happily between gulps of air.

Very little of the first pressing ever reached the gallon jugs. Uncle Bill would draw off a pitcher full of the new cider, drink a pint of it in great gulps straight from the pitcher, smack his lips, and pronounce it “elegant,” the highest word of praise in his vocabulary. The pitcher made the rounds, and it was a tribute to the hardiness of our stomachs that we drank so much of the fresh cider without ill effects. 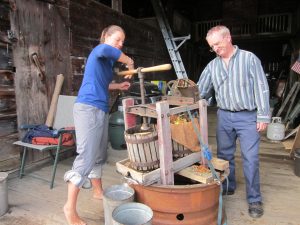 The mill continues to grind apples and press cider every fall and will continue to do so for many years to come if anyone cares to use it, for it is well constructed of strong oak and heavy cast iron. However, it probably will never have its crank spun so fast or its press turned down so tightly as when Uncle Bill operated it, nor will its cider ever taste as good, because nobody will ever make cider the way Uncle Bill did.