By Stacia Tolman, 2015
Photographs from the Tolman Pond Archives
Published with permission

Presented at an evening of storytelling at the Historical Society of Cheshire County, sponsored by the Monadnock Conservancy, 2015 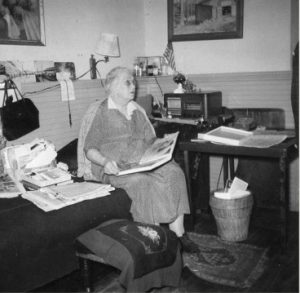 Ma Tolman in her sitting room

In the 50 years since her death, my great-grandmother’s diaries have resided under a built-in bench in a sunny spot on the south side of the farmhouse that looks out on Tolman Pond, in Nelson. I had always known these diaries were there, but they had the reputation for being dry, all business, nothing but the facts, and in fact they do comprise a record of the business she and her husband Wayland ran at Tolman Pond for many years, with help from Mabel, who lived on the other side of town. The business was part boarding house, part country inn, part farm, part vacation spot.

In their rambling farmhouse, my great-grandparents housed people and fed people, kept track of people and knew people, cared about people, took them hunting or fishing, skiing or snowshoeing, picnicking or swimming, and made sure that all were housed, fed, sleeping in clean sheets, and having a good time, using and enjoying the life that the land and weather had to offer. They didn’t have a lake or a mountain, but they had a pond and a hill, and the woods and fields, and guests would come back to Tolman Pond, season after season, decade after decade, generation after generation.

Her diaries are very factual. Every day of her life got one page, and she didn’t skip any pages. On the upper right corner of every page she recorded the temperature, a general note about the weather or season, and on the upper left how many eggs the hens had laid that day.

Here is a randomly chosen entry:

“Saturday, February 10, 1954
28 above. 8 eggs
Some sun early but it did not freeze overnight and snow most all gone. 20 for Sunday dinner. They found a place up City Hill where they could ski for a while. Cooked a 20 lb. turkey. Apple pie and ice cream.”

There exist eight diaries in all, so I’m sure there are many more which were not kept, but these eight date from the last dozen years of her long life. 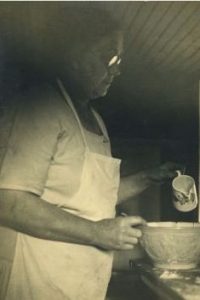 Ma Tolman in her flour-dusted apron

My great-grandmother, Sarah French Tolman, or Sadie, or Sade, also known as Ma Tolman, died in 1964, when I was three years old. I have no memory of her whatsoever. I do remember her kitchen, as a place which seemed to me to be entirely dusted in flour, and I remember Mabel, as kind of a vast calico presence, always happy to see me, and also dusted with flour.

Not remembering Ma Tolman doesn’t mean I didn’t know her, the way I knew lots of people who died long before I was born, from stories I heard told. In the stories about Ma, she attained a superhuman quality. She was very old, but she could see through barn walls. She could dispatch a deer into the freezer that had maybe been shot in the middle of the night and maybe not fully in season before anyone knew it was dead. On a moment’s notice, a carload of guests might show up around lunchtime, and she could put a chowder together from perch or hornpout or maybe even some of the lower orders of fish, but it tasted so good that it wouldn’t be right to ask. If you did ask, she would tell you very firmly, that it was ‘good fish’ in the soup, and the conversation ended there. Without ever being unkind to anyone, she could communicate very clearly that your concerns or complaints with your neighbor or your neighbor’s children, or marriages, or un-marriages, or re-marriages, were none of your business and you had better be minding that which was.

“March 10, 1951
38 degrees. 4 eggs.
Boiled pig’s head for souse. Wayland butchered 14 hens. East wind and rain with more than half ice out. Open water looks good. Town meeting in evening to decide about buying a grader. Decided against it. Sixteen for dinner. No chicken but tripe and fried oysters and onions it tasted so good, also fried sweet potatoes. Bavarian crème for dessert.” 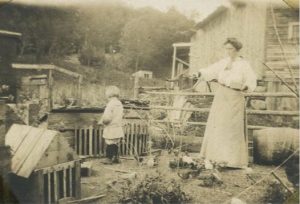 A younger Ma Tolman in the garden

In the bony and acidic soil of our corner of New Hampshire it was not easy to run an enterprise like this out of one’s own farm and garden, and from the stories that swirled around over my head, the most powerful impression of my great-grandmother was of her vigilant and sharp-eyed attention to resources, which attained mythic proportions: the time Wayland got a fork in the back of his hand when he was reaching for an extra baked potato—he protested that he was “just seeing if they were still warm.” If she cooked a dessert without every bit of the sugar the recipe called for, she would turn to the person sitting next to her and say approvingly, “My, isn’t this delicate?” She discouraged daily baths for the children of boarders, saying that too much hot water “destroyed the body’s natural oils” that children needed for proper thriving. She usually had a box of chocolate candy underway, a Whitman’s Sampler that a guest or boarder had brought her. Her habit was to nip discreetly the bottom corner of each chocolate to see what was inside. If it were anything other than a coconut crème, it would be rewrapped in its original tinsel, and go back in its little fluted cup in the box. As it was still a perfectly good chocolate, it would be offered up to company who routinely came by for a visit.

I’m not saying none of these stories were true, but stories do have a way of taking on a life of their own, particularly in the hands of a good teller.

Although Ma Tolman might have squeezed each penny three or four times before letting it go, what comes through the facts of her life was an immense warmth and generosity of spirit.

Ma Tolman as a character differs from the writer of her diaries, in which she wasn’t necessarily representing herself or anything else. Representation wasn’t her project. Keeping a diary was a way of keeping track, of course, of the machinery of what we now rather clumsily call ‘community’—the comings and goings of extended family, neighbors, meals cooked for any number of people who would come, stay, eat, hunt, fish, visit, and go.

“Saturday, Jan 24, 1959
10 degrees. 12 eggs
Pleasant, rather cold, windy. But good skating after the rain melted off the snow. 3 families out on the pond. A Danish couple, both writers from MacDowell Colony who are staying there to do some writing also skating. Both have written books. Very pleasant and quite interesting. I had baked beans and brown bread, cold roast pork, escalloped oysters, and green salad. Banana cream and 2 kinds of cake and coffee. 16 of us in all.” 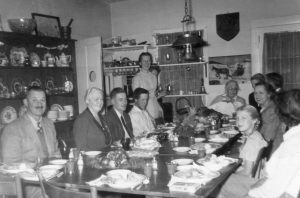 Around the dinner table

Ma Tolman nurtured a place, a community, a family, a business, many families, she made it all one with herself in the middle. The danger for nurturers is that if they give too much, they lose themselves in the larger project, but that didn’t happen to her. She stayed fully and firmly herself, and her diary I believe helped that. In addition to being a useful record of how many eggs the hens produced and when the peas went in, or the last parsnips dug out of the garden, she kept something for herself, and her notes were for herself.

Ma Tolman came to me in a dream once, when I was in my twenties, living and working in a distant city. In my dream she stands in the doorway of the same flour-dusted kitchen of my primeval memory while I frantically look for something I can’t quite seem to find. When I notice her standing there, she speaks to me with the same authority that was so remarked upon by all who knew her in life, the simple strength that comes from knowing what you are doing, and doing it well. “Everything you need,” she said to me, “is right here in this kitchen,” and then she repeated it enough times that I stood still and listened. From her diaries, I can tell that that was wisdom that she lived by, every day. Everything she needed was right there in her kitchen and if it wasn’t, there were many others, family and friends and neighbors, to bring it, drawn by her magnetism of caring, good humor, sharp mind, ready ear, and good food; and in that way her kitchen was perpetually restocked.

“Tuesday, Feb. 20, 1962
Pleasant early, then cloudy p.m. My 90th birthday and a very sunny winter day. Everyone was out skiing, etc, and we had plenty to do to get food enough for a crowd of 18 in all. Cooked 2 fowl. Thankful for fairly mild weather. After supper I was in my room and the gang all marched in singing happy birthday with a cake. So we all sat around the dining room and ate cake. I had 3 birthday cakes, 3 azaleas, 30 cards and a desk set.”

Nelson is a town which likes to talk about itself. In music, and in many forms of literary and visual art, Nelson has always had many stories to tell and many ways of telling them. My great-grandmother’s diaries, however, will probably not become part of the town’s rich artistic heritage. I might be the first person in 50 years who has read the diaries all the way through, and when I put them back in the bench on the south side of the farmhouse, it may well be decades before anyone opens them up again. She fed that art and the artists of the town, in more ways than one, and that was her art, requiring the same level of skill, energy, imagination, nerve, and stamina required of any artist.

In the eight years of diary entries I read through, each day was sufficient unto itself. Although running an enterprise
with so many moving parts and personalities required a great deal of planning, she didn’t use her diaries to plan. There were no notes about tomorrow, or the day before. Each day was its own canvas, a performance, combining food, people, gossip, weather, visits, laundry; the entries of her diary serve almost as labels, the way any productive artist labels their work.

As old age phased into very old age, Ma’s entries grew shorter and her handwriting shakier. She let go of counting the eggs and recording the temperature. But every day that passed was noted, right up until the very end of her life. Her last diary entry was so emblematic of the way she lived, in fact, it could be chiseled on her gravestone: