“Site of a small building said to have been erected by Josiah Billings before Breed Batchellor settled at K-4-7. [A-2-2] The occupant ran away leaving the house and contents which Mr. Batchellor occupied and appropriated.” Mr. Billings whereabouts were not entirely unknown at the time; deeds in the 1770’s to a piece of land nearby “except about two acres where Jabez Billings is buried.” [from Wadsworth] 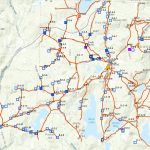