John Atwood was born in Medford, Massachusetts in 1729 and married Eunice Lawrence in 1751.  They moved to Templeton where the couple had ten children including two sons who moved to Packersfield. One, Philip,  preceded him to town,  arriving in 1778 (B-3-8.) In 1789 the other, Josiah, bought 50 acres of land south of the junction of  land south of the junction of Blueberry Lane and Center Pond Roads today and built a small house. His family consisted of his wife, Prudence (Knight) and four children. Their daughter, Huldah, was born here the year of their arrival; two more followed. Prudence died here in 1800. Josiah married Lydia White in 1802, but there is no record of them having any children of their own. Josiah’s parents came with them to Packersfield. Josiah’s father, John, bought the land just to the north of his son’s property and added that fifty acres to the family farm. John Atwood and his wife, Eunice (Lawrence) were in their mid-sixties when they moved here. Eunice died here in 1797 and is buried in the Village Cemetery. John sold the land to his son, Josiah, a few months after his wife’s death. John died in 1814 at the age of 85 and was buried next to his wife.

In 1819 Josiah sold a half interest in the farm to his son, Philip Atwood II. In 1831 he sold the balance of the farm to his son. In 1832 Philip. They continued to live there certainly until Josiah (1841) and Lydia (1851) died. The place does not appear in the 1858 County Map suggesting Philip and Eunice moved in with one of their sons for their last few years. Philip died in 1867 and his wife in 1871. Both are buried in the Village Cemetery. 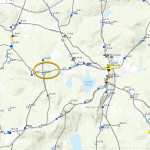