There is a nice cellar hole and barn foundations here about 1500’ along an old town road that runs north from Apple Hill Road. This property was purchased in 1803 by Nathaniel Breed III, grandson and namesake of one of Nelson’s founders, who built the house here. The following year he sold it to Alpheus Davis who moved his wife and young family here from Rutland, Massachusetts. Davis owned the place for four years before selling it to Bannister Maynard who lived nearby at C-3-3. The Davis family probably continued to live on the place before moving to B-3-2.

In 1813 it was acquired by Josiah Parker JR.. He married Sophie Griffin in 1814 and the couple welcomed the first of their nine children in 1816.  Josiah died in 1839 and his widow lived on the place until her own death in 1866 at the age of 76. Both are buried in the village cemetery. 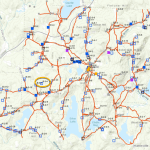