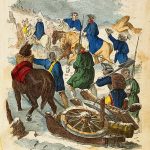 By William H. van Ingen, b. circa 1831 – This image is available from the United States Library of Congress’s Prints and Photographs division under the digital ID cph.3g09060.

The family left Massachusetts in 1767 to come to Packersfield (now Nelson), and by 1774 Joseph had cleared 18 acres, fifteen more acres were cutover, and a pole house had been built. He had bought land from Breed Batchellor in 1769 and in later years the land was described in town anecdotes “the place Joseph Stanhope now lives.” The authors of the pamphlet “Celebration by the town of Nelson, NH” documented that Joseph was very active in all public matters in the fledgling town, being elected as the first Selectman, Assessor, Highway Surveyor, and Constable when the town was incorporated in 1774. He signed the Association Test in 1775 and on July 3, 1776 he enlisted in a militia company commanded by Captain John Mellin out of Fitzwilliam. He and several other Nelson men were assigned to reinforce the garrison at Ticonderoga in New York. He had amassed quite a large farm before selling the homestead to Archelaus Wilson of Temple in 1777. Isaac Brewer occupied the place perhaps as late as 1791.  It was abandoned after him.  Wilson would then build his own house on the same property at E-4-13. Following his enlistment Joseph and the family moved to Vermont where he died on November 1, 1799 in Richford, Franklin County, Vermont. 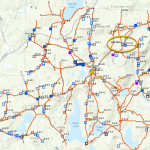