The house currently at this location is a modern one built on the cellar hole of an older house built by John White in 1781. The original house burned the night of October 1, 1966. 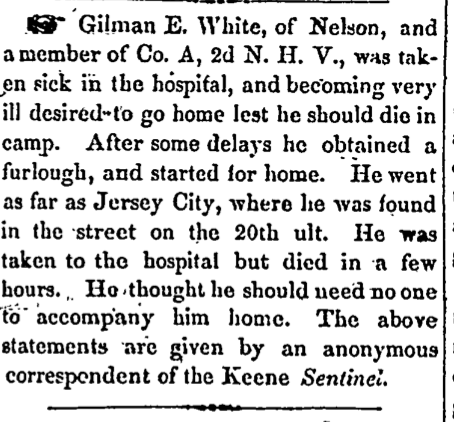 John White was a minuteman from Mansfield, Massachusetts who came to Packersfield in 1781. There is an extensive account of his service in the Revolutionary War in Celebration of the One Hundred and Fiftieth Anniversary of the First Settlement of Nelson, New Hampshire 1767-1917. In 1780 John married Lucy Tucker, also of Mansfield. The couple moved to Packersfield where they built a house and raised nine children. In 1821 they sold the farm to their son, Isaac White, and lived out their lives with Isaac, his wife Augusta (Eveith) and their eight children. John (d. 1846) and Lucy (d. 1836) are buried in the Village Cemetery as are Isaac (1867) and Augusta (1875.)  All of of Isaac and Augusta’s five children are also buried there including Gilman White who died of disease on February 20, 1862 while serving with the 2nd NH Regiment during the Civil War. The following is an account of his death published in the Peterborough Transcript.

On Isaac’s death, Augusta sold the farm to John Stevens of Stoddard. Stevens was also a veteran. At nineteen he joined the 6th New Hampshire Regiment commanded by Nelson’s Simon Griffin and fought at Second Bull Run and Antietam. He received a disability discharge in 1862 and returned to Stoddard. In 1869 he married Sarah Kinson and they lived here until their deaths, Sarah in 1929 and John the following year. The home remained in the family until Maury Collins bought it from the estate of Susie Stevens in 1963. 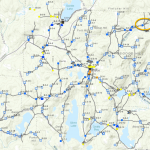