John Sprague bought 140 acres here from Uriah wheeler in 1784. He was a blacksmith by trade and came to Packersfield after service in the Revolutionary War. Born in Attleborough, Massachusetts, he arrived in Packersfield with his wife, Betsey. They had six children. They lived on the place until late in life. Their third son, Avery was born on the place in 1794,. Avery married Annie Johnson of Dublin in 1822 and the farm was transferred to him at that time. The younger Spragues had five children before they moved to Ohio and sold to Augustus Howard.

From the Peterborough Transcript 1861

Howard moved here from E-4-7 bringing his parents, Jacob and Mary who lived in the two north rooms of the house. He also agreed to support them for life. After his parents died, Augustus sold the place to Sewell Day in 1843. He died in a carriage accident in 1861. From the Peterborough Transcript 1861

Sewell Day, son of Rufus, was born next door at E-5-7. Sometime after 1858 he moved to Lancaster, Massachusetts. Theodore and Harriet French bought the place and lived there until they died in 1889 (Theodore) and 1895 (Harriet).  The home was abandoned at that point. 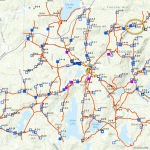