There have been three houses on this place. Thomas Richardson came to Packersfield from Attleboro, Massachusetts after the Revolutionary War, bought 200 acres on land in this area in 1784. In 1794 he sold 90 acres to his son, John, who built the first house here in 1795. John died in 1814 and is buried in the village cemetery. He sold to Samuel Fletcher in 1812.He sold it to his son, Isaac in 1829. Samuel sold the place to Reuben Phillips who owned it for two years. It was afterwards owned by Abijah Wilson, Jehiel and Zopher White and Rufus Phillips.It is said that Thomas Kidder kept a tavern here during these years. It was purchased in 1846 by Charles Scripture who lived there until a few years before his death. The place must have suffered badly for both its age and that of its owners for in 1894 Lawrence Collins bought it and build a new house some 150 feet from the old one.  Collins was succeeded by Peter Keough, a tenant of Forest Hart in the early twentieth century. Dr Alfred Struthers bought the property in the 1950’s and built the current house as a summer place. The house has been much modernized by subsequent owners. 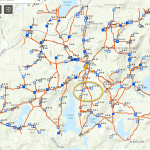