John Morse: Little is known about this early settler. There at least two people named John Morse in the records of early Packersfield. The one who built the house here one is the signer of the Association Test in 1776 and the one cited the record of a road that same year. The second John Morse was, briefly, a merchant in Nelson and died in January 1806 and is buried in the Village Cemetery “in the 37th year of his age.”  The mistaken age of John Morse in the One Hundred and Fiftieth Anniversary booklet and picked up by Parke Struthers comes from misreading the dead man’s age on the grave stone as 87.

John Morse built the home here on an old road about 100 yards up the hill behind the house at the junction of Tolman Pond and Nubanusit Roads today (E-3-10) as early as 1775. We know nothing of his origins or family. He was followed by Abiel (also Abial) Smith who came to Packersfield from Raynham, Massachusetts after the war where he mostly saw service in Rhode Island. Abiel and his wife, Abigail (Gilmore) arrived in 1777 with five children. Five more children followed before they moved to Vermont in the late 1780’s. Abiel developed the brickyard at E-3-5.

The Smiths were followed here and at the brickyard by Ebenezer Tolman, the founder of the family that still lives in Nelson seven generations later. It is possible that Cyrus Tolman followed his father here and may have lived here until Thomas Bartlett moved the house to E-3-10 when the road was relocated in 1839. 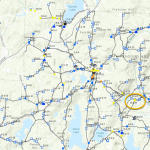