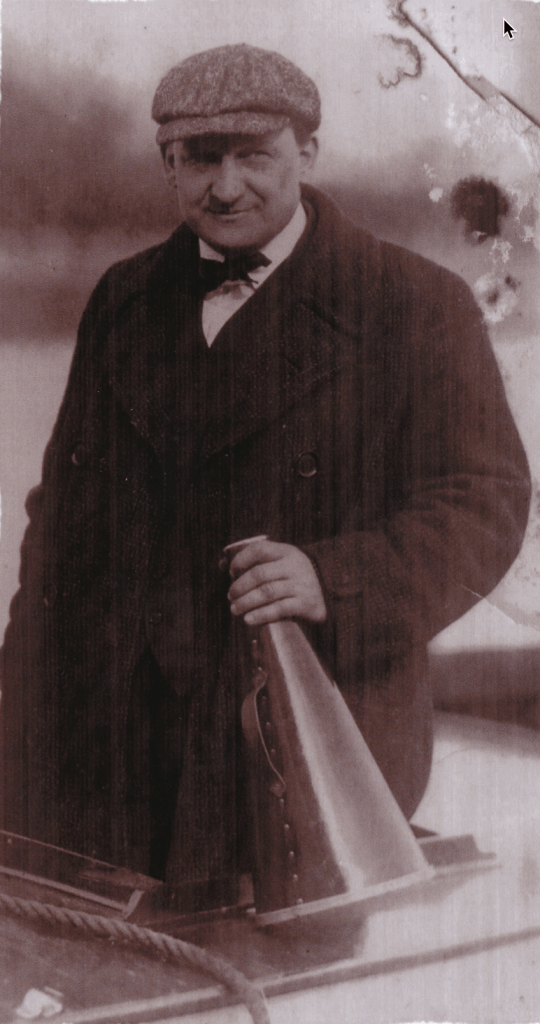 At Princeton University, Dr. Spaeth was preceptor (teacher/ instructor) 1905-1911, and Professor of English 1911- 1935. He was President of the University of Kansas City 1935-1938. He was also a published scholar. His work includes, with Henry Spackman Pancoast,[54] editorship of Early English Poems (1910/1911), translations from the Ang­lo-Saxon which included his translation of “The Seafarer,” a wonderful old poem Spaeth interpreted as a dialogue between a weather-beaten old sailor and a youth eager to go to sea. The parts are not assigned in the original manuscript, but according to Dr. Spaeth could be found in the structure of the poem itself. The poem was subsequently included in Old English Poems, published by the Princeton University Press in 1927. Also, in 1921 Dr. Spaeth completed his translation of Beowulf into alliterative verse complete with introductions and notes. The translation was published in Old English Poetry; Translations into Alliterative Verse with Introductions and Notes (Princeton University Press, 1927) and is still available today.

In addition to his work as a translator and editor, he was author of Christian Theology in Browning’s Poems (Princeton University Press, 1922). And finally, during World War I, Dr. Spaeth took a leave from Princeton and worked as Educational Director of the Young Men’s Christian Association (YMCA) at Camp Wheeler, Georgia, and Camp Jackson, South Carolina. The illiteracy of so many of the men entering into military service made schooling in reading and writing a necessary part of their military training. Dr. Spaeth responded to this need by writing Camp Reader for American Soldiers, becoming the first educator to prepare an “extensive theoretical introduction to the synthetic method of reading teaching written especially for teachers of adults.” [55] This program enabled many Gls in World War I to write home during their military service.[56]

Dr. Spaeth was known for his wit and aphorisms. One of his favorites, which endeared him to whole classes of Princetonians, was: “When two men love the same woman it doesn’t make for friendship. But when they love the same book there is a magnificent bond between them.”[57] He was, however, not known for his quiet voice. Joey de Martelly says her grandfather’s voice could prompt small children to crawl under a table.

He also had an athletic side. A burly man, known to students as Princeton’s Paul Bunyan, J. Duncan Spaeth coached Princeton’s rowing crews from 1910-1925.

The Princeton crews as well as the English Department knew the full flavor of Coach Spaeth’s sober exhortation to a crew he had taken to Cam­bridge to row against Harvard. “You will doubtless be beaten. But winning doesn’t mean anything. I don’t care whether you win or not. I just want you to behave like true sportsmen and true Princeton gentlemen.” Astonishingly to everyone, including themselves, the Princeton crew managed to out-row the Harvard crew. Returning with great dignity to the boathouse, the Princetonians were abashed to see their mentor hopping up and down on the dock, screaming: “We beat the ———-s! We beat the —­———s!”[58]

Dr. Spaeth was himself a rower. In 1971 he was inducted into the Rowing Hall of Fame for coaching by the National Rowing Foundation. To be eligible, a rower had to have won a world or an Olympic champion­ship as a member of a US national team. [59]

A 1936 article in Time Magazine announced Dr. Spaeth’s appointment to the presidency of the University of Kansas City with this colorful description:

A new church, runs the clerical proverb, “means a dead parson.” No fragile parson is J. Duncan Spa­eth, who at 67 has a voice so thundering that it routs other professors from adjoining classrooms when Dr. Spaeth chooses to pull out his vocal stops, impersonate Shylock or Othello in the grand manner. Last October the trustees of three-year-old University of Kansas City reached him by long-distance telephone, reminded him that his age would automati­cally retire him from Princeton soon, coaxed him to become their University’s first president. J. Duncan Spaeth roared, spluttered, accepted.[60]

Several friends and relatives of Dr. Spaeth came to Nelson. Dr. Walter Hall (1884-1962), himself a Princeton legend, was a history professor and close friend who with his wife, Margaret, came to Nelson and rented from Wilmer Tolman.

Dr. Hall was a fiery teacher. Sometimes he stamped his feet, brandished his cane, and was known to hop on his desk in the heat of describing a battle.[61] His hearing aid sputtered so much he was known as “Buzzer.” His colorful dress and teaching style became immortalized as a favorite subject in seniors’ Faculty Songs.[62] One verse referred to the fact that Dr. Hall lived in the country for a time, and drove his horse and buggy to work: “Buzzes in from Kingston way, In a ‘car’ that runs on hay.” Another verse described Dr. Hall’s annual lecture on one of his favorite historical characters: “On Garibaldi’s life and death, He yells himself quite out of breath.”[63]

Once, drenched by the rain, he whisked off his suit and conducted the class in his underwear! He took a perverse pleasure in scheduling most of his classes at 7:40 a.m., but classes were always full. Once a student did fall asleep after having taken the milk train in from Manhattan. The Buzzer spotted the sleeper, tiptoed to his seat, bent down, and let out a bellow· ‘Princeton Junction! Change for Princeton!’ The student never dozed again.[64]

Professor Strayer, Chairman of the History Department, wrote that Dr. Hall was ‘a powerful teacher,’ whose ‘strength lay in a rare ability to dramatize human events, however remote, and to kindle the imaginations of youthful minds.”[65] When Dr. Hall retired, a fund for an annual Walter Phelps Hall prize for the best senior thesis in European history and a fund for a series of annual lectures to be given in his name were set up by members and former members of his classes.[66]

Ethan Tolman, himself a retired professor as well as a lifelong resident of Nelson and a local historian, contributed several short essays to the Olivia Rodham Memorial Library to accompany donations by Michael de Martelly of a few of Dr. Hall’s books to the library. The essays relate local stories and memories of Dr. Hall and his family and their time here in Nelson. They firmly place Dr. and Mrs. Hall in Nelson’s history, and show the influence Nelson had on them.

“Michael drove an army ambulance in the European theater and returned. Or part of him did. Part had been left on the battlefields: he had a hard time reentering normal life. For some years he worked as a brick mason. Eventually, he went to Princeton as a History major, and what he did for his senior thesis is what is important for us. Not only his time as a brick mason, but also the years he later spent as an historical researcher, first at Historic Deerfield and then at Historic Williamsburg (at both places bricks are an important resource) must have been influenced by the Felt brickyard, helping his parents dig, carry out of the woods, and load onto a trailer for transport each fall to Princeton.” [67]

Carola Spaeth Hauschka (1883-1948) was J. Duncan Spaeth’s half-sister. Mrs. Hauschka was a landscape and portrait painter and a musician. She lived in Princeton and was known to play piano, with Einstein playing the violin . She also painted his portrait.[68]

Dr. Sigmund Spaeth (1885-1965) was John Spaeth’s half-brother. In the February 1992 issue of the Grapevine, a newsletter published quarterly in Nelson, Henry Putzel, Jr. included a section about Sigmund Spaeth in his article on local writers. It states that he was the author of over thirty books on music, and that he had been described as having “done more to promote good music . . . than any other figure in the musical world.”[69] Mr. Putzel also conjectured that Dr. Spaeth had probably been a frequent visitor to Nelson.

A Time Magazine article (22 August 1932) stated that Sigmund Spaeth was:

expert in tracing down the ancestry of current songs … Some songs come piecemeal from the classics, like “I’m Always Chasing Rainbows” which is found in Chopin’s Fantasie Impromptu. Others are scrambled together like “Yes, We Have No Bananas,” which contains bits from Handel’s Hallelujah Chorus, “My Bonnie,” “I Dreamt I Dwelt in Marble Halls,” “Aunt Dinah’s Quilting Party,” and “An Old-Fashioned Garden.” As Tune Detective, Dr. Spaeth sings, plays and analyzes snatches from current popular songs … Most obvious recent song­ pilferings, says Detective Spaeth, were two tunes by Charley Tobias and Peter deRose, “One More Kiss and Then Good Night” and “Somebody Loves You.” After Dr. Spaeth exposed these, the publishers righted matters simply, by adding on the sheet music the names of Lou Herscher and Art Coogan, and Charles Maskell, who had composed the originals: “After All I Adore You” and “I Want the Twilight and You.”

Sigmund Spaeth, 47, earned the right to be called Doctor by writing a Ph.D. thesis at Princeton on “Milton’s Knowledge of Music.” He has taught school, worked for Life, the New York Times, the old Evening Mail, and the Boston Transcript. He is half­ brother of Princeton’s large-bodied, large-voiced Professor John Duncan Spaeth, famed Shakespeare man and chairman of Princeton’s rowing committee. Shrewd, energetic and talkative, he describes himself as “writer, broadcaster, lecturer, composer, arranger and general showman and entertainer.”[70]

Marie Haughton Spaeth and John Duncan Spaeth raised four talented children. Dorothea Spaeth was stage manager for Martha Graham Dance Company, taught movement at the Manhattan School of Music, and fifty years ago was involved with the Alexander Technique, an exercise/stretching technique used to improve posture, health and well-being. The technique remains popular today. In her Smith College years she roomed with Mary Lightfoot, daughter of Pennsylvania Settlement colonist Thomas Montgomery Light­foot. John Spaeth was an architect and city planner of the City of Seattle. Paul Spaeth was a second and stunt man in the movies and owned a dude ranch in the state of Washington. Janet Spaeth was a Cresson Scholar at the Pennsylvania Academy of Fine Arts, and an accomplished sculptor.[71]