John Buxton, his wife, Elizabeth Burnap, and their children Eunice and Timothy Russell Buxton came to Packersfield from Wilton, NH in 1791 and built the house here. Elizabeth was the brother of John Burnap (D-4-2.) Buxton was a farmer and went on to operate the mill below Granite Lake at B-5-16 which he bought from Joseph Baker. He died in 1821.

The place was next occupied by Hills Scripture from 1816 until he moved to Stoddard in the 1830’s. Hills was the son of Samuel Scripture J (D-2-13) and married Patty Parker, daughter of Josiah and Eunice Parker (C-4-19.) The couple were married in 1813 and had three children before moving to Alstead and, then Stoddard. Gilman Scripture moved here with his parents in 1816 and bought the place from his father when the elder Scriptures moved to Stoddard. Gilman married Azuba Stevens from Stoddard in 1834. The couple stayed here long enough to have one child before also moving to Stoddard themselves.

They sold the farm to David and Martin McIntyre in 1838. The McIntire’s were here a short time before the place was purchased by Ebenezer Tarbox who moved here, when in his seventies, from B-5-5 where his son, Mark, had taken over management and ownership. Ebenezer died here in 1855 and was followed by his son, Eben. Born on the family homestead (B-5-5), in 1814, Eben married Laura Esty in 1842. The couple had one daughter, Emogene, who died here in 1861 at age 18. Eben died in 1881 and his wife in 1895. She was probably the last resident. 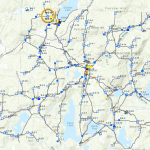