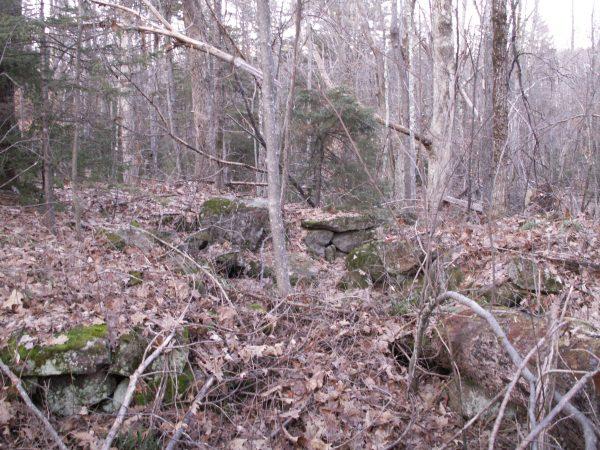 An interesting old foundation and difficult to find, it is located off Old Stoddard Rd and above the Osgood Mine. It was part of the original Nathaniel Breed farm. John Breed bought the land from his brother, Nathaniel breed JR., in 1780 and built the house there.  John was the fourth child of Daniel and Anne Breed arriving in Packersfield as a ten-year-old.  In 1782 he married Sarah Felt. The couple had nine children. Sarah died in 1826 and is buried in the Village Cemetery. Two years later, John sold the place to John Osgood as part of that man’s consolidation of his holdings on Osgood Hill. John Breed moved to Sandy Creek, New York where his daughter, Sarah, was living.

Sources say that Abijah Brown (John’s brother-in-law) built the place, but deeds make clear his holdings and homestead are north at D-5-3 and D-5-4.

Like many Packersfield men, John Breed fought in the American Revolution first answering the call to the Lexington Alarm with other Packersfield men under the command of his brother-in-law, Lt. Abijah Brown. While in Boston, Breed enlisted for an eight-month term of service We have a description of him from the that muster roll: “occupation; farmer; height 5 ft. 3 in.; complexion, fair; color of eyes; light.”

Congress passed a series of pension acts for the benefit of Revolutionary War veterans in the early nineteenth century. The first pension law based on service was passed in 1818, but it was later amended to make eligible only those soldiers unable to earn a living. The pension act of 1832 allowed pensions again based on service and made widows of veterans also eligible to receive pension benefits.

Breed had moved from Nelson to Sandy Creek, New York where he joined his daughters, Mary and Sarah and their families. At the age of seventy-five, Breed applied for a pension under the Pension Act of 1832. What follows is a transcript of that application. 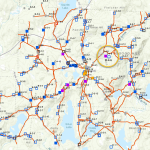 State of New York
Oswego County
On this 24th day of September in 1832 personally appeared in open Court before the Judges of the Court of Common Pleas (being a court of Record) now sitting John Breed a resident of the Town of Sandy Creek in the County of Oswego and State of New York aged Seventy Four on the 15th day of October 1831 who being first duly sworn according to Law doth on his oath make the following declaration in order to obtain the benefit of the act of Congrefs(sic) payed [sic] June 7th 1832.

I John Breed of the Town County and State afore said: Do hereby certify that I was born on the 15th day of October in the year 1757 agreeable to the Record in my Bible in the Town of Easttown* (sic) I believe in the county of Barnstable in the State of Massachusetts. When I was about 3 years old my Father removed to Sudbury in the same State. I resided there until I was Eleven Years old, at which time my Father removed to the Town of Packersfield, (now called Nelson) in the County of Cheshire in the State of Newhampshire (sic). I resided there until I was Seventeen Years old when the Revolutionary War commenced in the Year 1775. On the 19th or 20th day of April in the Year 1775 in the afternoon I entered the Service as a Volunteer in the Newhampshire (sic) line of Militia under the command of Lieut. Abijah Brown, Ensign Thomas Upham , Ord Sergeant Nathaniel Breed. Marched from Nelson through Lexington to Cambridge, under the command of the above named officers. Immediately after coming to Cambridge I enlisted under Capt. Ezra Town, or Towns of the New Ipswich State aforesaid (other officers of this company) Josiah Brown Lieut. —- Hartness (?) Ensign—-Williams Ord Serg. Said Company was attached to Col. Reeds Regiment of Fitzwilliam Newhampshire (sic) line Gen. Sullivans Brigade. Marched from Cambridge to New Ipswich Issued Arms and equipments, remained here a short time Recruiting and disciplining. Sometime in the Month of May, we Marched back to Cambridge. From there marched to Midford. On Tuesday before the Battle on Bunker Hill, Col. Reeds Regiment, to which I belonged Marched

Marched (sic) from Medford to Charleston, and were stationed on Charleston Neck, to guard the position. On the 14th of June 1775 early in the morning were alarmed by the roar of British Cannon, I think about 1 O clock in the afternoon of the same day We Marched on to Bunker Hill, exposed to the enemy’s fire our ranks marched Six paces apart. We gained our position on the Hill without any loss of consequence. A severe action soon commenced and here for the first time I saw men welting in their blood. Our Regiment had but thirteen rounds of Cartridges each, we here fought with a determined spirit until our ammunition was exhausted. One musket ball struck my my (sic) hat and knocked it from my head. Another struck my Cartridge box at the end and went through the same betwixt the covering and Wood [?]. We were overpowered by superior force and towards night retreated. I retreated with the wounded under Lieut. Browns command to Medford. The remainder of the Regiment retreated to Prospect Hill the same evening. On he morning of the next day our Regiment and Col. Starks Reg. Marched on to Winter Hill and commenced fortifying with energy. Our Regiment continued here until this campaign closed which was in January 1776. Doct. Green was the Surgeon of our Regiment and my Father Nathaniel Breed was the Surgeons Mate. My time of service in this campaign was Nine Months. I had no written discharge. I believe it was not customary in discharging military to have them in writing.

In the Month of June following 1776 I enlisted again for five Months under Capt. Warren of Cambridge State of Massachusetts. Our first Lieut. Name was Tufts 2nd Lieut. Name was Burton, Ord. Serg. Name was Brown. Said Co. was attached to Col. Whitlocks Regiment, and Gen. Brickets or Brackets Brigade in the Massachusetts line. I entered the service under the above officers I believe on the first of July in Said Year 1776 at Cambridge Common, and Marched from there through Lexington, Concord, Groton, New Ipswich, Keen, Charleston, over the Green Mountain through Rutland in the State of Vermont then on to Ticonderoga. Remained at Ticonderoga and its vicinity until my time of service expired which was on the first day of December in same Year. Gen. Gates I think commanded at Ticonderoga at this time.

I saw Gen Arnold at Ticonderoga after his defeat on Lake Champlain in a Privateering tour. The Drummer of our Company went with Arnold on this tour. Some others of our Company went out privateering tours. Our business while stationed at this Post was Fortifying, Guarding, Scouting [???] Some light out skirmishing, But no Action of consequence transpired at this Post in this Campaign. After my time of service expired as aforesaid in the fore part of the Month of Dec. 1776. Our Company Marched to Skeensborough now Whitehall where we drew a few days provisions were discharged by verbal Gen. orders and Returned home to Nelson.

In the Month of June 1780 I enlisted again for Six Months under Capt. Spaulding of Jeffery in the Newhampshire (sic) line Col. Nichols Reg. Lieut. — Dodge. Ensign — Hartness [?] Joseph Blanchard Ord Serg. Our Company Mustered at Swanzy or Winchester (I do not recollect which) under the above officers, and first Marched to Springfield in the State of Massachusetts then through Great Barrington to Claverack in the State of New York. Staid at Claverack about a fortnight. From there Marched to Fishkill. Staid there a short time, From there Marched to West Point. Gen. Arnold was in command at West Point when we arrived at West Point, after remaining here [?] a time our Regiment was ordered over the River to a place called Robinsons Farms a little below West Point. After remaining at Robinsons Farms a short time I was attached to what was called the Fat Cattle Guard. Then stationed at Crumb Pond and its vicinity. I was sent to relieve and take the place of a Soldier by the name of Robert Usher, who was one of said Guard. I reported to Crumb Pond and joined Said Guard consisting of about 16 Men. We had about 600 head of Beef Cattle to guard and move from place to place as occasion required for the purpose grazing, after remaining in this service I think about 4 weeks, about the time that Arnold performed his traitorous act information was brought us by one of our horsemen that 150 British light horsemen were approaching to capture our Cattle. Immediately Commenced a vigorous Retreat and pursued it with such energy that we saved ourselves and all our Cattle from the grasp of our enemies. We were soon relieved from this guard and ordered back to our Regiment at West Point. While I was out on this guard tower (sic) and while our Regiment lay at West Point

Gen. Arnolds treachery was discovered and his plot defeated. I remained at West Point but a short time before I was ordered to Fishkill to join the said Fat Cattle Guard again. I continued in this Service on duty until my time of enlistment expired. O until [?] was then discharged by Gen. orders and returned home to Nelson aforesaid.
In the Month of September 1777 I volunteered my services for the purpose of repelling the invasion of Gen. Burgoyne crossed the Green Mountain over into Manchester in Vermont from there to Saratoga in the State of New York then to Fort Edward, was principally employed in Scouting parties annoying British boats, and harassing the outskirts of the enemy. When General Burgoyne was taken I was on a Scouting party on the opposite side of the River. In this tour of volunteer service on this sudden emergency we were not regularly organized under any particular officer stated but engaged in any service or expedition where we were needed as Militia volunteers. The time of this Volunteer Service was 2 Months and it was a laborious tour after the surrender of Burgoynes Army I was furnished with a few days provisions and returned home to Newhampshire (sic).
In each and all the above tours of Service amounting in all to 22 Months I armed and equipt (sic) myself at my own private expense.
I believe I never received a written discharge but that in every case of the foregoing times of service, I was discharged verbally by Gen. orders. I do not know of any surviving witness now living to testify to my Service Yet it is possible there may be some yet in the Land of the living who served with me. If so they live in the State of Newhampshire (sic) 250 or 300 Miles distant from my present residence. I hereby relinquish every claim whatever to a pension or annuity except the present and declare that my Name is not on the Pension roll of the agency of any State in the Union to my knowledge. After the Revolutionary War I settled in Nelson aforesaid and resided there until the year 1828 when I removed to Sandy Creek, Oswego County, State of New York at which place I now reside. I am now in the 75th Year of my age.

NOTES:
[?] : Indicates uncertain spelling or word
[???] : Indicates an indecipherable word or phrase left out of the transcription
* Eastham incorporated in 1651 is in Barnstable County Massachusetts

This transcription has retained the original spelling, punctuation, capitalization etc. No attempt has been made to correct errors or update the text.