Joel and Charlotte Holt were one of the many families to settle in Packersfield after the Revolution. Born in Andover, Massachusetts in 1764.  Holt enlisted for three years from Wilton, New Hampshire and served in the Yorktown Campaign. Where, according to his pension application,  he was “breached.”

He married Mary Polly Colburn in Wilton in 1786 and immediately moved to Packersfield. The couple had eight children between 1787 and 1803. They sold the farm to Abel Parker of Nelson in 1831 and moved to Lyndeborough and, then, Concord, New Hampshire. He died in 1847. Abel Parker was here only two years. The place was abandoned after that. 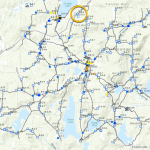