The existence of this cellar hole was only discovered because the town laid out a road to his house in 1780.  The record reads as follows:

The cellar hole is small. The well mentioned in the description above is easy to find. There is no trace of the road from here to road #34 or that from the well to the Dublin line. The place may only have been occupied for a few years.

We know little about Jeremiah Barrett. He arrived in Packersfield from Ashburnham, Massachusetts and built the house at E-4-5 in 1775 before moving here in 1778. We know from his deed when he sold this property that he was a bricklayer and that he moved from here to Dublin before 1790. 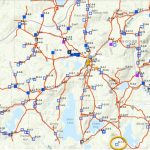