In the 1773 surveys, James Blanchard was recorded as having built a cabin and having cleared 8 acres. Blanchard came from a prominent Portsmouth family which at one time owned the entire southeast quarter of Packersfield. His father was one of Packersfield’s founding proprietors. This may be the site of that cabin. The cellar hole is primitive and approximately 12×18′ with no chimney bricks. It may have been built for Blanchard and occupied by people associated with the clearing. A cellar indicates at least an intent on year-round habitation. It is on the parcel of land later owned and developed by Stephen Foster (F-2-2) but it is too far from the site of his cellar hole to have been associated with it. Whoever built it was not there very long. 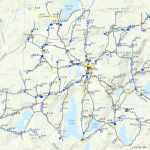