Born in Acton, Massachusetts, Jacob Wheeler moved to E-4-7 in 1777.  Jacob and his wife, Mary, had numerous children. One of those, Jacob JR, was born on the place in 1782. Mary died in 1808; her husband in 1841 at age 92.  Jacob Jr. stayed on the place and started his own family with his first wife, Joanna. She died and he married Abigail Howard, a widow from Andover, Massachusetts.

Jacob JR sold the farm to Augustus Howard, the son of his new wife, in 1828 under an agreement to provide for them for the rest of their lives. Five years later Augustus sold the farm to Horatio Osgood. The road to the place was abandoned in 1840. The Wheeler’s was the last farmhouse to be abandoned on what was then called Prospect Hill. Augustus moved his family and the Wheelers to the Avery Sprague farm (E-5-5) and executed a new support agreement. 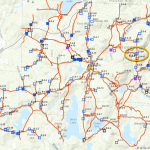