Jabez (also James) Grover: The site is marked by a small cellar hole next to the current home of Stacia Tolman.  Grover began to clear land at the north end of Tolman Pond in 1774 and seems to have built a house at this location in about 1777. He may have returned to Mansfield, Massachusetts for a time; in 1779 he lost the property in a tax sale but was able to recover it. He seems to have been followed by Consider Osyer in 1780. His presence is tangentially mentioned in later deeds. Osyer and his wife, Deliverance (Rhodes) moved to Packersfield from Wrenham, Massachusetts with five children; they added James and Adam during their tenure here. They moved to Vermont in about 1790. The murky chain of ownership continues through David Beard and to his son, Stephen who probably built the house that stands today at E-3-9.

The place was purchased with both houses on it by Amos Bryant (also Briant).  His son, Francis, developed a tannery between this house and Tolman Pond. Amos transferred ownership of the house and tannery with a right of way to the road to his son Francis in 1812. The deed reads in part: ”Containing by estimate 1 1/2 acres with the privilege of the water that now runs through said land by its running in logs under ground from the head of the brook that now runs through said land and the privilege of the lane to the farm house from the road.”  Francis and his family probably lived here until his father died in 1833 when he sold the property and moved west. The house was probably abandoned shortly afterwards. 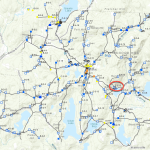