Isaac and Mary Davis, moved from Rutland, Massachusetts in 1782 after Isaac had served a number of enlistments in the Revolutionary War including the Battle of Bennington. They lived here until their deaths in 1836 (Isaac) and 1837 (Mary). They were followed by their son, Isaac, who lived there until his death in 1875. He was followed by his son, Calvin who died there in 1903. The buildings burned in about 1907.

Grantee: Isaac Davis of Packersfield, husbandman, from Grantor: Benjamin Nurse JR of Packersfield, husbandman, L16 10s SW Qtr: West part of the north lot of land formerly owned by Joseph Simonds and is bounded as follows: begins at a stake and stones set up for the southwest corner of [the] land and stands on the east line of the Town of Keene and stands 17 rods north of the southwest corner of said Simond’s north lot, so called, ad runs east 10 degrees south to a stake and stones; from thence runs north 10 degrees east 130 rods to a heap of stones in the middle of the branch; from thence bounding down said branch in the middle of same to the east line of the Town of Keene; thence bounding on said line last mentioned southwardly 123 rods to the beginning. 55 acres

Book 45 p. 69 4/19/1803
Grantor: Isaac Davis of Packersfield, yeoman, to Grantee: Solomon Buckminster of Packersfield, yeoman, $5 1 acre and 67 rods lying on the east line of my farm. Beginning at a great stone by the north side of the road leading from my house to said Buckminster and runs by the north side of said road 10 rods 5 links; then north 13 degrees 45 mites east 21 ½ rods to a heap of stones; then west 8 degrees north 9 rods and 20 links; then ; then south 13 degrees ? 30 minutes west 24 rods 4 links to the beginning.

Book 60 p. 285 8/19/1811
Grantee: Isaac Davis from Grantor: Ruth Batchellor $150
SW Qtr: Is the northeast corner of the farm whereon the said Ruth Batchellor now lives and is bounded as follows: On the north by the homestead of said Davis. West
on the line between Packersfield and Keene. East by land lately deeded by Ruth Batchellor to Stephen Chase. And to extend so far south on said Chase’s line and on said town line so as to contain 25 acres. Making the south line parallel with the line of said Davis’ homestead.

Will of Isaac Davis – Roxbury, NH
(transcribed by Candyce Fulford)

Note:  This has been transcribed from the scan of Isaac’s Will found at Ancestry.com.  Punctuation and spelling is as is seen in the scan.

In the name of God amen  I, Isaac Davis of Roxbury being weak in body but of sound and perfect memory blessed be Almighty God for the same do mak  (sic) and publish this my last will and testament in manner and form following.

I do also give and bequeath unto my youngest daughter Bathsheba the sum of three hundred Dollars p’srvd (sic) [preserved?] by my son Isaac Davis Jr in one year after my decease and the use of the east square room while she remains in an unmarried state after her mothers (sic) decease and the use of one cow and four sheep while she remains unmarried

I do also give and bequeath unto my oldest daughter Susannah Esty six sheep in one year after my decease and her daughter (Mary?) for her name (?) one coverlette (sic) that was her great grandmothers (sic) and to the said Susannah one cow and two sheep at the decease of my wife

Signed sealed published and declared by the above mentioned Isaac Davis 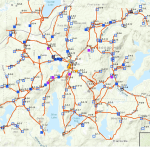