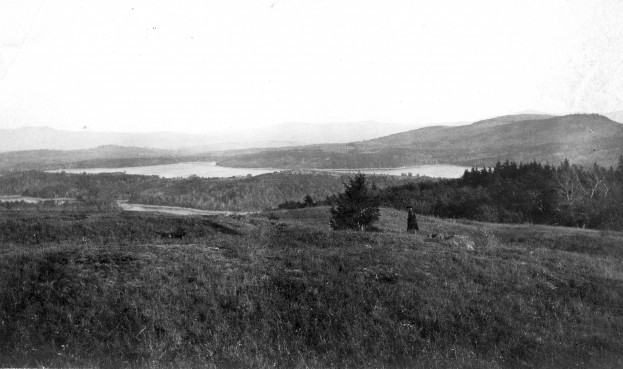 From the top of City Hill, overlooking Spoonwood and Nubanusit, 1906

High above Spoonwood Pond sits a special place called Greengate. Today the scene is one of a beautiful house sited to take full advantage of majestic views and surrounded by nicely kept landscaping. What was it like in 1904 when William S. Hall bought the property from Wilmer Tolman? Tolman farmed when he could spare time from his mill at Mosquitobush, hiring out his teams for construction work and catering to the needs of city people who came to rent his cabins. He owned hundreds of acres of old farmland in Nelson; much of that had returned to forest.

We know from photographs taken then that Hall could see the view that we see today and that Samuel Adams saw when he first cleared the site in the late eighteenth century. The old Adams home was certainly gone when Hall built a home on the old cellar hole. There might have been a few roses or lilies left to remind us of the people who’d lived there. In pictures taken at the time we can see that the apple trees Adams planted still graced a field growing wild. The new place designed by Hall’s friend and relative, Fredrick Law Olmsted Jr. was planned to provide easy living in a tranquil spot with spectacular views of the ponds and Mount Monadnock. Olmsted was the namesake and son of America’s most famous landscape architect, the designer of New York’s Central Park. The son became a nationally renowned urban planner and landscape architect in his own right and helped Theodore Roosevelt found the National Park Service. 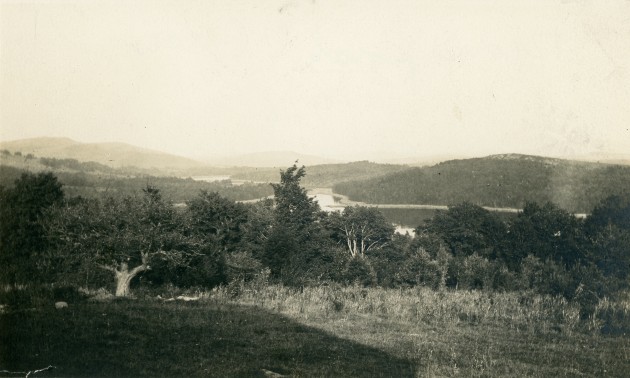 Nubanusit from porch at Greengate, about 1910

Hall reclaimed the old Adams hilltop developing what we now call Greengate. Here he retreated from his Boston law practice to enjoy the serenity of the view and the company of his friend Louis Cabot, another summer refugee from Boston who lived nearby at Merriconn Farm. Sarah Sharples Olmsted (wife of Frederick) and the Sharples family inherited the place when their bachelor cousin, Hall, died in 1937 and they sold it to Newt and Janet Tolman when Olmsted retired to California in 1950. Certainly the place created by Hall could be called scenic, beautiful and even serene. Just the sort of ambiance to calm a busy Boston lawyer, reinvigorate a well-known designer and inspire Newt Tolman’s writing and music. 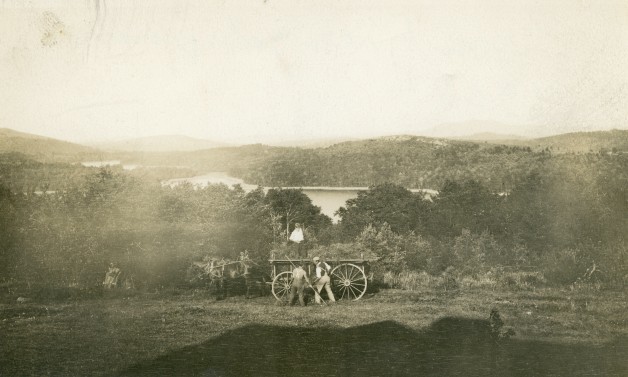 In 1810 the farm of Samuel and Sarah Adams was blessed with views of Spoonwood and Mount Monadnock, but the scene could not be described as serene or inspiring. Adams was in crisis and Adams’ twenty-two year old son, Joseph, had put his own prospects in jeopardy trying to hold his family together and save the farm. Samuel Adams state of mind could hardly be called calm or serene, he had gone insane, run up huge debts and brought his wife and their children to a state of crisis.

Insanity afflicted the early settlers of Packersfield just as it does people today. Samuel Adams, the town’s only documented case, was a Revolutionary War veteran who ran up huge debts and threw his family on town support. The condition we call post traumatic stress disorder was first documented in 1867 after it was discovered that the Civil War had affected the mental health of a number of its veterans. Packersfield’s Samuel Adams may have been the town’s first case. His huge debts suggest his illness had a manic element. It is impossible, of course, to diagnose him from a distance of over two hundred years.

Samuel Adams bought his forty-acre farm at the site of Greengate in 1778. He cleared the farm and moved his wife and first child there about two years later. Children arrived at the regular two-year intervals until there were five in the fall of 1790. At some point Samuel became insane and lost the ability to manage his affairs. He lost the farm and became, with his wife and three of their children, the town’s most expensive welfare burden.

Adams fought in the Revolution starting with the Lexington alarm marching with the minutemen from Dedham, Massachusetts. He enlisted for the balance of 1775 and 1776. Adams enlisted again from Packersfield in March of 1781 serving until April of 1783. His discharge papers describe him as “age 28 years, stature 5 ft. 5 in. tall.”(1)

At first things seem to have gone well for the Adams; as the children came, he added to his farm purchasing an additional 12 acres in 1799 for $25. Samuel and Sarah’s seventh and last child, John, was born in January of 1801. Sometime after that Samuel’s management of his affairs began to unravel. Parke Struther’s History of Nelson New Hampshire reports that Samuel had gone insane.

By age fifty-five Samuel Adams was deeply in debt and in danger of losing everything. It was left to Adam’s third son, twenty-two year old Joseph Adams, to attempt to save the family farm by adding his labor and credit to expand the farm and make it more successful. In 1810 he bought 60 acres on the “Island” between Nubanusit Lake and Spoonwood Pond to add to his father’s farm. His father’s debts had mounted, undoubtedly preventing the senior Adams from financing the deal himself. Later that same year Joseph bought his father’s farm and mortgaged it so that the elder Adams had $700 to pay off his debts in full. This was a huge amount of indebtedness for a farmer with 112 acres to incur, far exceeding the value of the home farm itself.

For two years Joseph and Samuel attempted to make the farm support the family, but it wasn’t sustainable; their taxes and other bills went unpaid. The burden of his father and the hard times engendered by the Embargo of 18092. In 1812 Joseph petitioned the selectmen to take care of his parents:

[sic] would be for their and my benefit. This is to desire your interference in the way your wisdom may point out. Joseph Adams”3

The town formed a three-person committee to recommend a solution. Joseph Adams agreed to turn over to the town all the real estate and property he had received from his parents and the Town agreed “to keep Joseph safe” from the responsibility for his parents. Thaddeus Barker was appointed agent to take care of the Adams and their eleven-year old son, John.

The selectmen received the deed to the Adams farm from Joseph Adams4 and 1 pair of 3-year old oxen, 2 cows, a 2 year old heifer, 1 yearling heifer, 1 calf, 11 sheep and 2 swine. Joseph paid all of the debts owed by his father amounting to $46.13. He sold the “Island” pasture to the Bryant family. The town rented out the Adams farm for a number of years to cover some of the Adams’ costs. Having lost their home, the Adams were housed with other families at town expense. This was done annually at town meeting in a process called “bidding out” where the pauper was the subject of a public reverse auction in which people bid to provide their care.

Bidders under this system were entitled to whatever labor the pauper could provide. As the Adams advanced in age and Samuel’s mental state deteriorated, the family became increasingly expensive. By 1820 they were the town’s most expensive welfare case at $153.13. The town budget that year was $2237.20; the school budget, $451.95 and the welfare expenditures in total were $637.81 covering 27 people. (1820 Nelson census: 907 inhabitants.) The Adams’ daughters, Polly (22) and Fanny (28) were on the town’s list of paupers on and off over the ensuing years.

As a Revolutionary War veteran and a pauper, Samuel Adams was due a pension. In 1818 the town undertook an effort to obtain that pension. Henry Wheeler drove Adams to Fitzwilliam where Judge Parker dealt with his pension application. Based on his declaration of service, Adams obtained pension certificate number 10.826. This was followed by a town-paid trip to Marlow to collect the pension resulting in the Town’s receipt of Adam’s first pension payment in the amount of $85. Adam’s yearly pension of $46.67 became a regular part of the town’s receipts, but was hardly enough to cover the substantial cost. Selectmen regularly appeared in the Court of Common Pleas to attest to Adam’s continued poverty and so maintain the pension. The July 4, 1820 petition to the court declared that Adams had no means of support and was insane.

In 1824 the town sold the 52-acre Adams farm for $482.40. Adams died in 1832 at the age of seventy-seven. Sarah followed him five years later. They are probably buried together in the Nelson Cemetery, but their graves are unmarked. Up on the old place his apple trees are gone but not his stonewalls.

All we know of Samuel’s son, Joseph, is that he married Azubah Henrys in Packersfield in 1811. He doesn’t appear in town records after he sold his land on the “Island” to the Bryant family in 1815. He probably joined the growing number of Packersfield men who went west to New York for a new start.

1This according to his pension declaration made on 10/7/1818. [One Hundred and Fiftieth Anniversary of the First Settlement of Nelson, New Hampshire 1917. Nelson Picnic Association]

2Packersfield sent a petition to the Congress of the United States that gives a picture of the impact of this law on farmers. It read in part: “We are generally cultivators of the soil earning our bread by the sweat of the brow. Many of us are in debt for our land or buildings; we have no means of paying our contracts or taxes, nor purchasing necessaries for our families but by selling our surplus produce. Of this modest payment we are deprived by the embargo restrictions.”

The author thanks Ethan Tolman for his editorial help.