The kitchen in most homes is still the center of activity, although it is different from the old Nelson kitchen described by the Rev. Edwin Noah Hardy (1861-1950) in an edited selection taken from his manuscript “Home Life in Nelson,” written early in this [20th] century. – Roberta Wingerson 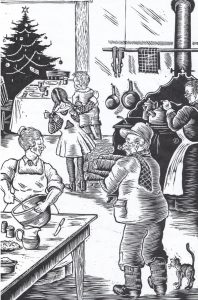 The Old Kitchen at Christmastime. Block print by Fran Tolman

The old kitchen was the best loved and most used of all the rooms of the house. It served not only as kitchen, but as dining room, sitting room, parlor, and general living room for the whole household. Even the young swain did most of the courting of his sweetheart there in the presence of others. The itinerant shoemaker and other specialized workmen plied their trade there for the family, and members of the household worked in the kitchen at handicrafts to earn a few extra shillings or supply particular needs of the family. For the first [18th] and well into the last [19th] century, everything was handmade, each family priding itself on his ability to make just about everything – tools, garments, furniture, etc. – required for daily domestic use.

The kitchen was also used on occasion for making candles, cider, and soap, as well as for apple parings and quilting parties. In the kitchen the flax would be broken, the heckle spun and woven, the wool fleece transformed into the homespun suit; in fact, the kitchen was distinguished among other uses as a household workshop. The women were extremely industrious and any leisure secured from the common routine of domestic duties was eagerly used for mat-braiding, chair caning, palm-leaf-hat making, button making, spoon molding, beadwork, and fancy sewing and knitting. It was rare indeed when the kitchen was not being used for some of these activities.

The entrance to the kitchen was ordinarily through a large door from the lean-to or shed. The windows were few and small. In the early homes cupboards, closets, and pantries were rare. The kitchen dresser with wooden or glass doors, and more often doorless, held the pewter and china dishes in common use and the spices, cooking utensils, and baked foods.

The huge fireplace with a hearth of stone, brick, or tile was the distinguishing feature of the room. By the side of the fireplace stood the settle, a high-backed wooden bench with arms wide enough to hold two or three adults. This was the favorite seat for the aged members of the family. [It was the warmest place in the house.] Inside of the fireplace were one and often two iron cranes with S-shaped hooks of various lengths to hold the kettles. The skilled housekeeper could by proper adjustment of the kettles on the swinging cranes hasten or slow the cooking of her dinner at will. The swinging crane was a Yankee invention and not in common use until nearly the time of the first settlement of the town [1767]. Nearby would be a motley collection of skillets, griddles, pots and pans, and a boot-jack, tin lanterns, and dinner horn.

The kitchen was unpainted and unplastered and ordinarily without sheathing. The bare boards became blackened and grimed with smoke from the fireplace. Hanging from the overhead beams in the fall would be drying pumpkins, strings of apple rings, bundles of sage, flag root, thoroughwort, pennyroyal, catnip, checkerberry, and other herbs. 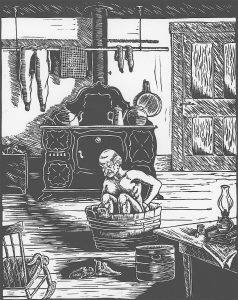 On the side opposite the fireplace was a sink with a wooden shelf attached. A lead pipe, or far more often, a square wooden trough, would carry waste water through the outside wall. The water pail stood on the sink shelf and wooden or tin basins were in the sink. Extra kettles and skillets, scouring sand or brick, a pan of grease for use on cowhide boots, a box of sulphur, and other nondescript articles found a safe hiding place in the enclosure beneath the sink. On the shelf over the sink would stand a row of neatly polished candlesticks, the tinderbox, and other needed things. Hanging nearby on the wall was the knife box. The good bone-handled knives and two-tined forks were expensive and highly prized.

Over the door hung the old flint-lock gun with powder horn and bullet pouch nearby. In the chimney corner would stand the birch-shaven broom and the house mop. There would be common wooden-bottomed chairs and stools for family use. The long dinner table was somewhat narrow and usually supported by X-shaped legs. Of course, there was in the evolution from log cabin to the larger frame house a corresponding evolution of the furnishings, from the roughest and crudest to furniture of exceptional grace and beauty.

Three very important items in the old kitchen were the big brick oven, and the Dutch and tin ovens. The brick oven was built into the side of the fireplace. It had a flat floor four or five feet in length and about three feet in width with an arched top and an iron door. A great fire would be built once a week, usually on Saturday. When the oven was heated to the proper temperature, the hot coals would be shoveled out, and the floor brushed clean. It would then be ready for use.

The tin oven or “roaster” made of tin or sheet iron was used mainly for roasting meats. It was open to one side [facing the hot fire in the fireplace], with a spit that could be turned to allow even cooking. The results were a more delicious roast than modern appliances can produce. Underneath the spit was a drip-pan that caught the juices and fat that were used to baste the roast and make gravy. [Vegetables roasted in the drippings have an incredibly good flavor!] The Dutch oven was used for bread and cake baking. [It was a heavy kettle with a lid made of cast iron. It was placed over the coals in the fireplace and additional coals were heaped on the rimmed lid to provide even heat. Baking time was about the same as in a conventional oven.]

Round and square gridirons were used for broiling meat by placing them over red-hot coals raked onto the hearthstone. Some were made to save the delicious drippings from the meat. Potatoes were generally baked in the hot ashes.

A shovel, tongs, and an iron poke were necessary for tending the fire and for cooking. A long-handled wooden [or iron] shovel was required for the brick oven. Dusted with Indian meal [corn meal], the mass of prepared dough was placed on the shovel and then, by a dexterous turn of the hand, was slid off into the desired corner of the oven. This shovel was also used to remove the baked loaf of bread or the cake.

A cookbook in the writer’s possession, printed in 1837, indicates that the cooking stove was just then coming into use in the larger cities. It first appeared in 1819, but did not come into general use until 1850. It was unknown to many a home in Nelson until much later and with it came radical changes to the domestic life described here.