Betsy and Henry Wheeler came to Packersfield from Concord, Massachusetts in 1796 and built a home here. They farmed the place until 1801 when they moved to B-3-11. Andrew Stiles followed and lived there until his death in 1828.Andrew and his first wife, Lydia Holt, had five children in this house before her death in 1813. He remarried, Dorcas Beard the daughter of David and Hannah Beard, and had three more children. Dorcas’ parents, David and Mary moved in with Andrew and Dorcas the 1820’s. Andrew Stiles died in 1828 followed by Hannah (d. 1828) and David (d. 1836.) After her father’s death, Dorcas sold the farm to Willard Jewett and followed her sons, David and Henry to Illinois. David and Hannah Beard are buried in the Munsonville Cemetery as are Andrew and Dorcas Stiles.

Willard Jewett married his cousin Elvira in 1832 and the couple welcomed two children. They probably lived with Willard’s father, Isaac, at C-4-5. Their youngest, Chancy, died in 1835 only a year old. Chancy was followed the next year by his mother. Willard Jewett bought this farm and 165 acres in 1836 five months after his wife’s death. He remarried Mary Kitteridge, daughter of Joshua Kitteridge the following year and they grew the family by seven more.

The house that stands there today is not the house built by Henry Wheeler in 1796.  That house burned in a fire on November 15, 1865. It was quickly rebuilt as a two-family home and Willard and Mary’s son, Franklin, moved in and cared for his parents until their deaths (Mary 1883, Willard 1889.) Winslow Atwood succeeded him in 1890. 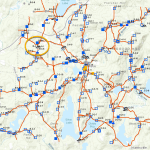