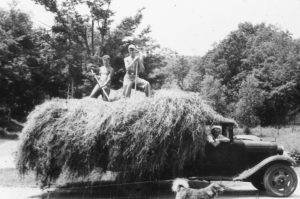 When I was a boy, my grandfather kept three or four cows. He had just enough hay fields to provide enough hay to last them through the winter, although if the hay crop were particularly poor, perhaps he might have to buy an extra ton or two to tide them through until the cows could be put out to pasture in the spring.

Exactly how many acres his fields totaled is uncertain because they were scattered, irregular fields of a New Hampshire hill farm, but ten was the number he would quote if anyone asked him. Of course this acreage was figured without taking into account the combined areas of the rocks that stuck up in the fields. It is a worn-out joke that New Hampshire fields grow rocks as well as hay.

The only field that you could mow with the assurance that the mowing machine wouldn’t tip over and that was relatively rock-free was the Intervale, a ten-acre field of which my grandfather owned half. The Intervale, however, presented a different problem. It was as flat as a pond and tended to degenerate into a swamp on a wet year.

On an average year, mowing would start about the third week of June, and the first crop would be in the barn by the second week in July. The Fourth of July was always a date to aim at, but it was an exceptional year when my grandfather could boast that his first crop was all in the barn at that time. I suppose that today on a dairy farm with modern equipment it wouldn’t be considered much of a week’s work to get in ten acres of hay, but my grandfather was a cautious man and his equipment primitive, so he never liked to have very much hay on the ground at one time to risk a soaking by unpredictable summer thundershowers. The second crop of hay, known as the rowen, would be cut around the middle of August, but because the hay was always much shorter and sparser, it didn’t take long to get in.

Until my father, Newt, bought his tractor, the mowing was done with Old Jim, the Morgan horse. Old Jim was a good old horse, but he used to find pulling a four-foot cutter bar through head-high grass pretty hard work requiring backing and filling and occasional pauses to pry the clogged grass from the knives and fingers of the cutter bar. His lot wasn’t eased by the voluble swearing of my Grand Uncle Bill French, who used to drive him. Along with the tractor, my father bought an old two-horse mower, and so Old Jim was retired from haying accept for pulling the horse rake. It was my job to ride the mowing machine, and, except on the Intervale, I found myself busy nearly every moment scanning the approaching strip of hay for rocks, raising and lowering the cutter bar, and throwing the machine in and out of gear. No wonder Uncle Bill used to swear. He had to do all these things and drive Old Jim as well.

Although Barry, my cousin and best friend, and I didn’t have to help with the haying, we always did because we liked it. Our grandfather never asked us to help even though at times he was short handed. In retrospect this was sound psychologically and probably intentional on his part. We never had the feeling that we had to help, and consequently we worked harder and more willingly than if it were a chore, like the milking that was required of us.

The preliminary stages of haying, turning the hay after it had dried on one side, “shaking out”, spreading the hay out in the morning after it had spent the night in a windrow, and “tumbling up”, the piling of the hay preliminary to pitching it onto the truck, didn’t have very much allure, but they were put up with. The part of haying that we liked was pitching the hay onto the truck and “mowing” it away into the barn. We were too small to pitch hay onto a high load, and so our usual job was “raking after”, the raking up of the scattered leavings after the “tumbles”, or piles of hay, were pitched onto the load.

Occasionally a big moment came when we were allowed to “make the load” – stand atop the growing load of hay on the back of the venerable Model “A” Ford truck and receive the forkfuls of hay. There was a considerable skill to making a good load. Forkfuls of hay had to bind with one another to keep the load together, and the load had to be built “square”, straight up from the flat hayrack, in order to get a large load on. Care had to be exercised that the load was not built out too far lest it fall off on the bumpy road to the barn. The person who built the load directed the people pitching on where the forkfuls should go. “Let’s have one on the back corner. Okay, next on right beside her to bind her.”  Imagine, a thirteen-year-old boy telling grown men what to do!

Where Barry and I really came into our own was in “mowing away”, the packing of the hay in the hay mows in the barn. Because barn space was limited, hay had to be forced back into the narrow spaces under the eaves and tramped on to be settled. Our small size was a great asset in working in places where the headspace was limited by the rafters of the barn, and we had two pitchforks with cut-off handles especially for mowing. 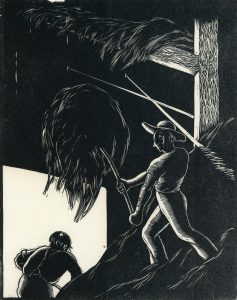 As the hay rose in the lofts, the heat rose, too. The windows were blocked off one by one as the hay filled the barn until we were working in near darkness, and the thick, moist air became so choked with chaff that breathing became difficult. The hayseed clung to our sweating back and itched; and when we scratched, it itched worse. But these hardships were shrugged off with the knowledge that we were doing an important job, a necessary job, and doing it well. In the peak of the barn was a small window, above even the highest level of the hay, from which we could see the pond – blue, cool, and inviting – whetting our appetites for the supreme pleasure to come: the first plunge into the water.

Top photo is of the old Model A Ford truck with Bobby Curtis and Foster Sisson “making the load” and Pop (Wayland Tolman) looking out the window. Pop was Renn and Barry’s grandfather. The linoleum cut print is by Fran Tolman, Barry’s father.