Abraham Goodenow was born in Sudbury, Massachusetts in 1749 and moved to Packersfield in 1783. He came with his second wife, Silence, their three children and his oldest, Abraham Jr. They had six more children here. He established a sawmill at the outlet of Long Pond, now called Nubanusit, to saw pine and oak into boards and timbers needed to construct the hundreds of houses and barns needed to support the exploding population in the aftermath of the Revolution. Goodenow built a new mill on the site  that was capable of grinding grain in addition to sawing.

Abraham died in 1804 and the mill passed to the Howard family – Joseph, James and Nathaniel. Nathaniel sold the mill to Ebenezer Tolman JR who ran it from 1809 to 1814. He was followed by Henry Jewett from Watertown, New York. Jewett ran it until 1818 when he sold it to Oliver Wright JR a cabinet maker. He was soon joined by his brother, Abiel.

By 1818 the building boom was subsiding and there was more of a market for furniture. The Wrights converted the old sawmill to a cabinet shop with the ability to do lathe work. This was more suited to the market at the time and probably enjoyed larger profit margins. Other mills in Nelson made a similar conversion at this time. The Wright brothers ran the refurbished mill until 1836 when they sold to John Farrar. He ran it until 1847 and was succeeded by Luther Cobb (1847-1849.) The mill’s last operator was the partnership of Charles Plummer and Addison Rugg. By 1854 Plummer and Rugg also had interests in a mill at the outlet of the Great Meadow, later called Mosquitobush, and partnered with two others who had land at the outlet of Nubanusit to build a dam there to regulate the flow into the meadow. That dam soon became the principal structure at the outlet of Nubanusit and the cabinet making shop probably ceased operations some years later. In any case, the woolen mills in Harrisville soon acquired the water rights upstream on Nubanusit Brook. The following is the text of the dam agreement:

Agreement between Abial Wright, Charles Sheldon, and Plummer and Rugg of Nelson.  That we will build a dam for the purpose of flowing our meadows.  The said dam shall stand partly on said Wright’s land and partly on said Sheldon’s land.  The said Wright agrees to furnish the timber for said dam as his share of the expense.  Plummer and Rugg agree to furnish 500 feet of planks as their share of the expense. And said Sheldon agrees to complete the whole dam which shall be built in a good and proper manner.

Said dam is for the improvement of said meadow and for nothing else. Said Wright, Sheldon and Plummer and Rugg agree the dam shall remain undisturbed for said purpose forever. We also agree that the water shall be stopped on or after the 20th of September each year and shall be drawn off on or before May 20th. Also we agree in case of snow preventing the water passing off causing it to flow back upon said Plummer and Rugg water wheels, they shall have a right to draw at said dam a sufficient quantity of water to remove said obstacle. 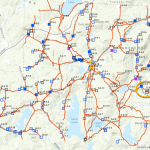