Little remains at this site today but as flattened area north of the brook. Here in 1794, Thomas K. Breed built a fulling mill* with a shear. Fulling mils were used to treat woolen cloth woven on home looms to finish it.

He bought land on either side of the brook in 1794 for about $35.  Having constructed his mill, Thomas Breed sold it a year later to a partnership of John Breed, Richard Stoddard, Abijah Brown, Amos Child, Alan Breed and Nathaniel Breed for $350 taking a mortgage. Thomas Breed lived near the property at D-4-3 and probably operated it. He sold his house in 1803 and moved to Antrim where he established a similar business. He was repaid for his share in 1813 and the mill probably operated beyond that date. Amis Burnap purchased the house in 1803 and lived there until his death in 1812. His wife, Rebecca, sold the place to her father-in-law and, probably left Packersfield. 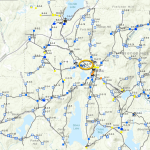