Frederick was the son of Danforth Taylor who moved to B-4-1 from Stoddard and occupied the farm of Robert Sheldon.  Sons, Frederick and Henry Danforth came with him. Frederick Taylor bought the sawmill (B-4-7) from Abel Kitteridge in 1841. Since the creation of the mill in 1798, the mill owner had lived at B-4-4. That house was sold separately to Noah Hardy, JR and the new mill operator, Frederick Taylor, built a new house on this site when he acquired the mill.

From an article that appeared in the Keene Sentinel in conjunction with the auction of the “Danforth Taylor Farm”, we know who the builder was: “The house has quite a history having been built for the late Frederick Taylor, not far from 1841 by the late John Cummings who was master workman, we have been informed, in building the church at Nelson Center.”

More than a decade later when Frederick took over another mill in Munsonville and converted it into a chair shop, he moved there (C-5-15.) It is likely that the operator of the chair factory here lived in the place as long as the mill operated.

More recently the place has been owned by Irene Tompkins and, today by Chris Tuttle. 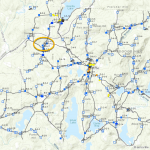