Frank Upton’s gone now, along with his kitchen. But, it wasn’t long ago that Barry often went down the road to Frank’s farmhouse to sit around his kitchen table. As Frank got older, Barry said that he was just checking up on the old man who then lived alone, but there was clearly something more. Something that not only enticed Barry, but enticed a host of friends and neighbors to gather around Frank’s scruffy old drop-leaf table.

And, it certainly wasn’t the smell of the kerosene pot burner or yesterday’s fried liver (Frank liked it well done). Nor was it the stale and overflowing ashtray hand-crafted by his good friend Boo Doore from Harrisville, or the spare floatplane propeller propped up in the corner, or even the Remington pump-action deer rifle that hung in the spider webs over the kitchen window, under which a toaster fire had once charred its butt end. And it probably wasn’t the wind that howled off the lake through the north end of the house, often accompanied by mini-drifts of snow blowing into the kitchen.

“What it was,” Barry says, “was that the kitchen door was always open – that old door scratched by generations of dogs – it was always open and everybody was welcomed in by Frank.” 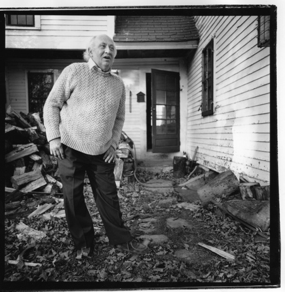 Mismatched mugs, chipped cups and tarnished spoons (even some sterling silver ones whose worn family monograms spoke of times past) were scattered among the paper clutter and the jar of instant coffee – perhaps a metaphor for the people often sitting around Frank’s kitchen table – some as mismatched and chipped as the mugs. That was the allure. You never knew who was going to be there. And there was always somebody there – an impressive cross-section of humanity.

Perhaps it was yesterday’s social media, but news got passed along around Frank’s table – the good with the bad.  Stories that now make up a large part of our local lore were told (Frank was a master storyteller). People laughed and cried. This was a true gathering of community vitality where things were shared and ideas were born. Frank’s kitchen was a “happening” place, where a kind of grassroots democracy thrived.

Ray Oldenburg, author of The Great Good Place, would have called Frank’s kitchen a “third place”, where people gather and interact beyond the realms of home (1st place) and work (2nd place). This 20 year-old book spoke of the growing loss of such informal gathering spaces and the community disconnect that has resulted.

In fact, folks at the Nelson Community Forum, held in September 2010, understood Oldenburg’s concerns, and shared some of the following thoughts:

“There’s no place to talk about day-to-day happenings”

“We need a common place where we can ‘bump into’ others”

This theme repeated itself throughout the Community Forum weekend. The town is crying out for “third places”.

While many wonderful “events” exist in Nelson that bring us together – first Tuesday teas, first Thursday potlucks, NELS luncheons, ice cream socials, etc. – many still seem to hunger for spontaneous gathering places in neutral spaces. Some of us may seek that place in our amazing library, while others may seek that place in one of the general stores in our neighboring towns, where people gather to sit for a cup of coffee, some friendly conversation and community.

Folks at this end of town often seek the community of The Harrisville Store, where we not only ‘bump into’ our Nelson neighbors, but also have a chance to swap news and ideas with our Harrisville neighbors. The Store is a gem among general stores, and in its own special way, it answers the call of Frank’s kitchen. 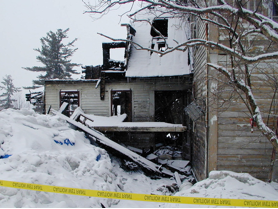 When the chairs around Frank’s kitchen table would break down, they were relegated to his no-longer-used front parlor to gather dust.  However, a replacement would somehow emerge (sometimes even an antique Chippendale) from that same abandoned parlor – perhaps another metaphor for the allure of Frank’s kitchen. It was a social equalizer, not only for his chairs, but also for the people who sat in them.

Even though I know that most of Frank’s chairs burned up in his house fire, every time I go to The Harrisville Store, I like to imagine that a few of them were rescued from the charred remains, fixed up and passed along to the Store, where they live on in the spirit of Frank’s kitchen.