The Reverend Jacob Foster served the town of Packersfield for ten years from 1781 to 1791. During that time twenty-seven families joined the church. We do not have census data that exactly match the years Foster served, but the population of Packersfield in 1783 was recorded as 511 and in 1790 as 721.  The census of 1790 listed 160 families.  The town had grown to the point where Foster’s contract called for full pay — 70 pounds in 1774 money.  We can estimate that the number of families had increased by about sixty and just under half had joined the church. Mid-way through Foster’s tenure as town minister, Packersfield undertook the construction of a much larger meetinghouse. Begun in 1786 and finished enough for use by 1788 it was, at sixty by forty-five feet and twenty-eight feet at the eaves, a house of worship to make any town and its minister proud.

Some kind of dispute ended the service of Packersfield’s first minister.  Town records do not tell us the nature of the trouble, but do record a difficult process by which the Reverend Jacob Foster was “dismissed” from service and a settlement made between him and the town.  We can guess, from the content of the proceedings, that money was a central issue in the dispute.

The first evidence of a problem is found in the minutes of the town meeting of June 30, 1791 with the following entry:

“Voted not to accept the Rev Jacob Foster’s answer as satisfactory. Voted to agree with the Church in a mutual council with the Reverend Jacob Foster.”

The town meeting appointed to a committee of five to draw articles of charge against Reverend Jacob Foster and arrange the evidence. The members were Deacon William Barker, Solomon Wardwell, Joseph Abbott, David Beard and Abraham Goodenow

We can read several facts into the situation by reading the entry carefully. A complaint had been made against the Reverend Foster that had not been answered to the satisfaction of the town. There were two bodies involved: the church and the town. Later documents refer to a third body: The Venerable Council. The town appointed a committee to manage this process and that committee represented both the town and the church.

Somewhat over a month later the committee presented its report to the town. We do not have a copy of the committee’s report. At some point the Venerable Council entered the dispute and rendered its own report, apparently in support of the minister. The town members met on August 9th, but failed to agree on a way to resolve the issue. The meeting was adjourned to August 17th when the town met four days in a row to try to resolve the issue. The meeting got testy at times as reflected in a vote to appoint Captain Ezra Smith and Lieutenant Peletiah Day “to keep order while the committee acts.”

Finally, after five days of meetings to discuss the issue, the town reached some kind of resolution and on the 20th “Voted not to accept the report of the Venerable Council 72 to 0. Voted that Deacon William Barker, Joseph Abbott and Solomon Wardwell be a committee to give the thanks of this town to the Venerable Council.  “Voted to choose a committee to tell the Reverend Jacob Foster the result.”

The town paid Council expenses in the amount of 25 pounds and Josiah Melvin was paid for boarding the Council.

Whatever issue the congregation had with its minister, it had reached crisis proportions by the time it made the official town records. At that point virtually the entire congregation wanted their minister gone; one of the Church’s deacons, William Barker, was on the committee to draw up the charges. The other deacon, Solomon Ingalls, was the meeting’s moderator.  Finding himself isolated within his own community, Foster had turned to a council of fellow ministers for support.  His peers were encouraging, perhaps supporting the institution of the Church more than the man, but they were not proof against a congregation that was clearly of one mind regarding the man’s failings as their minister.

In early October the town received a proposal from Foster for a mediated end to the dispute:

“To the Town of Packersfield,

Gentlemen: Although in some former proposals I observed that the clergy were not to be excepted [accepted] in settling our difficulties [The advice of the Venerable Council had been rejected unanimously.] yet sensible that it is of great importance that these difficulties should be healed, I hereby propose to the people in this place that I will refer the final settlement of everything of a pecuniary nature to the judgment of five indifferent men of the laity the chairman to be chosen by mutual consent of the other four; two to be chosen by the town and two by myself, the choice to be overruled if any reasonable objection shall be made. And said referees when together may take into view as the ground of their judgment my present situation and that of the town, the late result of the council in this place and all the civil transactions between the town and myself. These proposals are so reasonable that I think they cannot fail of giving satisfaction. From your affectionate minister.

Whatever the other issues between the parties, this letter appeals for a settlement of the “pecuniary” and of “civil transactions”. The latter probably refers to the terms by which the contractual relationship between the town and the minister could be ended. The town seems to have accepted this negotiation process, but on August 27th the town asked for assurance that Mr. Foster would agree “not to charge the town any pay for three Sabbaths to come if the town will call a meeting before the fourth Sabbath Day and comply with the award of the late differences between said Foster and the Town.”

On November 15th Packersfield held another town meeting entirely devoted to the Foster matter. The Committee reported verbally that Rev. Foster had agreed.  The meeting took action accepting “the award of the late reference [mediation] between Jacob Foster and the Town.” The town voted not to raise the 135 pound settlement, but authorized Amos Child to borrow money on behalf of the town. Three days later the town met again and appointed a committee to ask the Reverend Jacob Foster to agree to ask for a “dismission” from his duties. The meeting was adjourned and  John White, Peletiah Day and Samuel Skinner waited  on Mr. Foster’s response. They received his written answer immediately after the meeting:

“To the Church and Congregation in Packersfield: As I am informed that the town has accepted the award of the late arbitrators and have appointed a committee who have given security in behalf of the town for payment of money, so I am now ready and willing to join with the Church and the Town in calling a council to dissolve the relationship between me and the Church and Congregation agreeably to the award and desire this may be done as soon as may be convenient. Packersfield, November 18th 1791 thirty-nine minutes after six o’clock.”

The town had devoted nine meetings covering the period from June to November 1791 including one marathon, four-day, virtually continuous meeting.  The committee of five that was first appointed to specify the town’s complaints saw the process through from beginning to end. The town must have been emotionally drained from a public contest with its minister. Though we do not know what complaints the town had against Mr. Foster, it apparently owed the minister a great deal of back salary.  Perhaps they had tried to get him to resign and had held his pay as leverage. It may have been a scarcity of ready cash. These were days of a largely barter economy when cash was scarce and people worked off their taxes on the roads.  Goods and services were exchanged or notes given in anticipation of a future payment in money or other things of value. Perhaps the town had tried to pay Foster in commodities it had received in payment of taxes or in notes given by taxpayers in debt to the town. We do not know. We can say that his seventy-pound salary was competitive; his successor, the Reverend Gad Newell was paid a similar amount.

Mr. Foster was finally paid in March of 1792 and left Packersfield.  He returned at the end of his life. He died in 1798 and was buried near the new meetinghouse.  The final chapter in the story was the reacquisition by the Town of the land Foster had been granted for his parsonage. His epitaph reads:

No age exempted you may see

Death had a summons fixed for me”

We probably think that using commodities as a hedge against inflation and mediation panels consisting of mediators selected by each side are twentieth century inventions; they were practiced in Packersfield in the eighteenth. 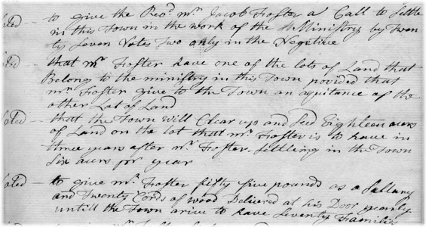 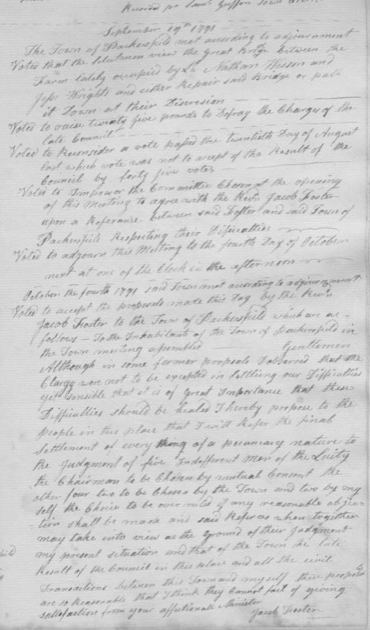 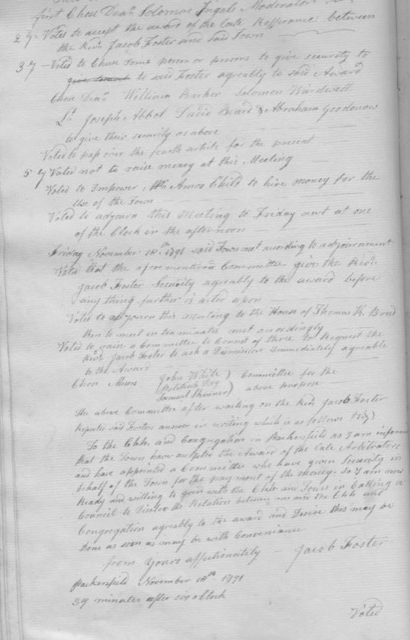 Editors note:  This is the third and final article in a series relating the founding of the first ministry [...]

The Reverend Jacob Foster served the town of Packersfield for ten years from 1781 to 1791. During that [...]

The original charter of Monadnock Number Six stipulated founding a successful town in accordance with the king’s requirements. The [...]

A possible resemblance to a service in the Nelson Meetinghouse. The Second Meetinghouse was built in 1786 when the [...]

In the early development of manufacturing, areas that afforded the potential for water power were prime locations for community [...]