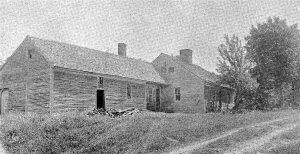 When I was fifteen I went to live with a farm family at the Nelson end of Lake Nubanusit in the Monadnock Region of New Hampshire. This became a second home to me all through my adolescence. I was a high school drop-out, intrigued with country living and eager to learn how to split wood, harvest ice as well as vegetables, milk cows and braid rugs. The Uptons were willing teachers and always happy to have help with the many necessary chores to keep an isolated farm and household functioning in the 1930s. My father had died when I was two and Frank Upton became the closest man I had to a father. His wife, Frances, and I, despite our age difference were close friends. When I left to go to college we became regular correspondents. I recently found over a hundred letters she had written me from 1935 to 1945.

Frances Upton was not a typical farm wife. Her father had been President of Hampton Institute in Virginia. She was a graduate of Simmons College. Fran met Frank Upton when she was a counselor at Camp Halecroft on Nubanusit Lake. They had one son, Frank, Jr., known as Frankie, and a foster son, John.

Fran’s letters tell much about life as a farmer’s wife. The house at first had only kerosene lamps for lighting. She cooked on a wood stove all the years that I was there, canned vegetables, made soap and sewed her own clothes. She writes of the hardships due to World War II. Her vivid descriptions of the changing seasons are entrancing. Her delightful sense of humor is evident in her portraits of the animals who lived on the farm.

I have taken excerpts from the many letters leaving grammar, punctuation, spelling as it was in the original.

Fran’s humor and her ability to laugh at herself is evident in the salutations of her letters. Although I was always called Meg her letters’ beginning included every form of Margaret – Peg, Maggie, Margot, Madge and Marguerite. She didn’t stop there, I was also addressed as Nettie, Minnie, Barden-Family-Twiglet, Light of my tents, My own Pomegranate Blossom, Lamb in My Bosom, and Apple Bright my Heart’s Delight.

She explains this habit in one of her letters:

“You’ll have to bear with me because I like a salutation. Its like saying Hello Kid, bows, tricks – Just about as banal but I like it. There’s probably something very wrong with me but I like so many plebian things, such as this paper (it was pale blue with darker blue border) and all kinds of perfumes. And I mean “plebian” in its worst sense too – not just its original good meaning of belonging, but in its derived sense of waning slightly vulgar.”

Frances Upton’s descriptions of the weather and the scenes from the farmhouse are far from vulgar:

“I am writing out on the porch la la, and it is paradise, utopia, garden of Eden elysian fields with a haze hanging over the lake and dandelions thrown all over the field and all the birds on Frankie’s bird list singing at once, making love right here on the apple tree.”

“The field back of the house is spattered with daisies, buttercups, fireweed, lavender daisies and clover like a stylish print out of Creative Designs done by one of the rising young artists. I like to walk through it when Frank isn’t looking – he wants the hay, every blade, pointing to the sky and my fairy footfalls are so easily detected. The syringa bush is out and those lilies in front of the parlor windows and the columbine, pink and purple, and the swallows in the pent house across the road have quintuplets we think, and the lawn has to be moved twice a week, and out in the road are little piles of sawdust from washing ice.”

“Last Tuesday we had a big snowfall – a fall not a blizzard. It snowed all day – there wasn’t a breath of wind – it just came down without a sound. I was alone here all day – it felt as remote and untrodden as a fastness in Siberia or Tibet and I didn’t spoil it by reflecting that in a month or two there will be lows, gilmores, smiths, drummondi, wilbours and ferocious man eating griffens and bergs where ere you walk (these were names of summer boarders and neighbors who came only when the weather was warm). That day I saw the open lake, a gun metal shade, very Saks Fifth Ave., edged with this snow I told you about and every place where a twig came out of a limb or a limb came out of a branch or a branch came out of a tree, there was a tuft of snow, and the green grass growing all around and the green grass growing all around. There wasn’t any green grass but I was afraid if I didn’t finish out that verse I would feel frustrated.”

“Two weeks ago we got an unexpected snowfall just a little for a number of days, but it has piled up gradually until now we have almost a Feb. landscape. All last week the lake was still open and as the water was low there was a wide collar around the edge for the snow to fall on and that effect of water and snow in proximity is one of the things I live to see. The water enhances the whiteness of the snow and the snow enhances the blueness of the lake and I always decide that that intense ultramarine is my favorite color after all. I remember writing this to you once before. ‘We talked about the weather’ sounds so banal, but my sophisticated friends will just have to put up with me. Of course, poor Frank is cussing because the road to the woodlot is well nigh impassable and he and the truck driver get stuck all the time.”

“We’ve got the most exciting godawful blizzard you ever see – raged yesterday and all day today. Your room is full of snow and yet those windows fit so tight you can’t open them without bursting a lung.”

My room, when I was at the farm, was on the north side of the house. None of the bedrooms were heated. The heat from the register in the living room warmed the bathroom and the upstairs hall where I got undressed and then quickly opened the bedroom door and dashed over the icy and sometimes snowy floor to my bed, where in the winter I could hear the ice crackiing on the lake and in the summer the eerie call of the loons.

“We are in the midst of ice harvest. It’s a good crop nice firm fruit and not a rotten spot in a truck load. Frank has a teamster here from Marlboro with two good work hosses. He sleeps in your bed and the hosses are in Ameses garage.”

Frank harvested ice not only for his family, but also for some of the families who came to their summer homes on the lake. The ice was stored in little houses built for that purpose and insulated with sawdust. Ice boxes holding big blocks of ice from the lake were the only available refrigeration in the summer.

Read Part Two of This Article

*Meg Barden Cline lives and writes in her 1830 farmhouse in Stoddard and in her home in Keene.