The charter granting Monadnock Number Six to its proprietors required that a central place be set off and reserved for public purposes and that a meetinghouse be built. Batchellor laid out ten acres of common land in the center of the town at the location of the village cemetery today. With the population increasing, indeed the town needed a place to gather for worship and hold town meetings. Early roads converged on this central hilltop; the town built its first animal pound there and the early store and tavern were nearby. The common included a burial ground where the dead were buried.

A proprietors meeting held in February 1772  “voted to clear four acres on the ten acres reserved for public use and voted to build a duty meetinghouse.” In April the town moved to put a plan into action by voting 25 pounds to build a meetinghouse 25’ X 30’ with posts 8 ½ feet long. It seems to have been built almost immediately. But, as we shall see, rebuilding was required in a mere ten years. Anne Breed, daughter of Nathaniel and Ann Breed, born January 30, 1773, was the first person baptized in Monadnock Number Six meetinghouse in July 1773.   The Reverend Joseph Farrar of Dublin presided and preached the first sermon in Packersfield. The first proprietors meeting was held there in October 1773.

All we can tell about that first building was that it was a frame structure, probably cape style and 8 ½ feet high at the eaves. It held fifty or sixty people for a meeting.  That is an ample size for town meetings attended by only adult men, but must have felt crowded when early church services were held with women and children adding to the numbers. Church attendance was virtually required in those days, but Packersfield did not have a settled minister until 1780, though not for lack of effort. The building was repaired in time for that first minister with a pew added for the Reverend Jacob Foster and his family.

From a description of repairs that were made in 1783, we get a few more hints about its appearance and construction. In only ten years of weathering and use, the building had fallen into disrepair. Town meeting voted repairs costing 73 shillings as follows:

“Voted to find one thousand boards and use the same in rough ceiling the meetinghouse and three windows twelve panes each seven by nine and hang the door. 1000 white pine boards brought to the Meetinghouse at 30s [shillings], 3 window frames of 12 squares each with sashes 12 [shillings] 36 panes of glass 18 [shillings].

One half thousand ten penny nails bid off by Lt. [Aaron] Beel at 7s. [Beel was the town’s first blacksmith.] Bid off by Mr. Beamis [Henry Bemis] to nail up 1000 of boards set 36 panes of glass with 8 tins each, hang the door and put one piece of timber the woman’s side and nail up the boards that are sprung off.” 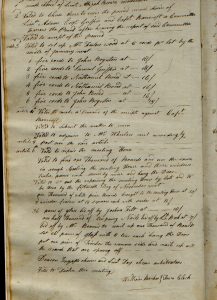 Critical readers of this description will doubt that the ceiling of a building of that size would require 1000 boards.  Town records are transcriptions made near the time and are subject to transcription error.  The use of half a thousand nails suggests the number of boards might have been one hundred not one thousand.

The extent of work needed presents a picture of disrepair and provides more details of the building itself.  It had had no ceiling, but now would have one of boards. Three windows needed repair and that was probably all the building had. They weren’t very large as window glass was quite expensive. They were double hung sash with twelve panes of glass each. The common configuration was six over six. There were two common pane sizes in those days. The ones used, seven by nine inches, were the most common and least expensive. Window glass in those days was imported from England. Window glass began to be made in Keene only in 1814 forced by the Embargo of 1809 and the War of 1812. The meetinghouse was a single, dimly lit 25’ x 30’ room.

There is no reference to a chimney and there probably wasn’t one. Indeed preaching in the winter of 1780 was divided on a rotational basis between the houses of Nathaniel Breed, John Adams and Samuel Griffin. Breed’s house was selected to serve the northern part of town; Adams and Griffin for the southwestern and southeastern parts respectively. The arrangement could have been motivated by difficult winter travel as well as warmth within the houses. Town meetings held during the winter months were usually adjourned to the home of Uriah Wheeeler next door.

The door needed rehanging and the siding, probably clapboards, needed nailing where they had sprung off.  The roof was undoubtedly shingled. It is a picture of a plain but serviceable structure. All we know of the interior is that the seating was in pews; that it was divided with men and women separated, and that it had a pulpit. It was called a “duty” meetinghouse both because it was required by the town charter and because it was basic and utilitarian.

The remainder of the burying ground was cleared and a stone wall 4 ½ feet high surrounded it. The wall was built by Joseph Felt and Abijah Brown. 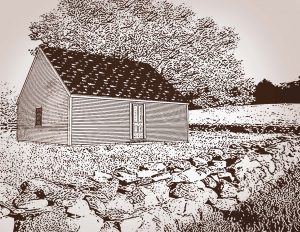 The repaired meetinghouse was too small so in 1785 the Town of Packersfield voted to build a new meetinghouse beside the old one with gallery and two porches one on either end for 125 pounds.  The second meetinghouse took seven years to complete, but it was finished enough so that the old one could be sold and moved off the site in 1788.

Nathaniel Breed’s son, Thomas, bought the old one (without the pulpit) for 12 pounds. He moved it to a place just south of the cemetery where, according to an unpublished tract by the Reverend Edwin Noah Hardy, it was used as a store and tavern for a number of years. We are not sure of this location. Parke Struthers in his History of Nelson reports that it was located just south of the cemetery and became a home occupied by a succession of cobblers.  It was painted red. David and James Beard bought the property south of the cemetery from the town in 1797.  The former meetinghouse seems to have been moved, again, to that site; there is a cellar hole there today that could accommodate a building of that size.

According to Parke Struthers, Barnard Warren may have been the first cobbler there, plying his trade in Packersfield as early as 1797, but he was never the owner. Oliver Stone bought it from the Beards in 1822 and continued the shoe business; he and his wife raised nine children in the old meetinghouse. The Stone family was followed by Henry H. Flint, who carried on his shoemaker’s trade there. Probably in the late 1830’s when the current village was built, the old meetinghouse was moved again to become part of the home where the Quigleys lived on the northeast corner of the new common.  The Quigley house with the remnants of the 1773 meetinghouse was taken down in the 1980’s and the site used for the new library.

The author is grateful to Sue Kingsbury for her skillful editing.

Editors note:  This is the third and final article [...]

The Reverend Jacob Foster served the town of [...]

A possible resemblance to a service in the Nelson [...]

In the early development of manufacturing, areas that afforded [...]