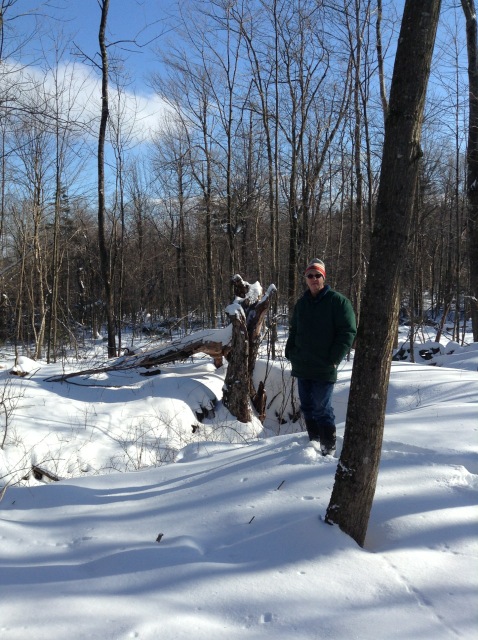 A snowy morning in February found Dave Birchenough and me crammed into the cab of a grapple skidder rumbling through the woods of the northeast corner of Nelson. There was a logging job underway on the old Sawyer Farm. We were able to drive my ageing truck up the old town road (abandoned since 1860) to the landing near the farm. The skidder was using its grapple to stack logs on the landing. Another machine was feeding a huge chipper.

“Are you the owners?” Chuck Rose yelled over his diesel. “No we’re amateur historians.” I answered. “You’ve come to the right place”, he said, “There are lots of old stone walls and old roads in these woods.”

“Have you found a cellar hole over there?”, I said, pointing to the south and the side of Rollstone Mountain.

Following skidder roads and straddling stumps and boulders, the machine clawed its way uphill to a table of relatively flat land between Holt Hill and Rollstone Mountain. We got off beside the 30 x 40’ foundation – the original home of Benjamin Sawyer, his wife, Tabitha, and their fourteen children. The land sloped away to the north with beautiful views through the thinned, leafless woods. A beautiful place and an exciting discovery. The site was covered in several feet of snow.

Historians prefer getting their understanding of the past from original documents. They thrive on the detective work that a paucity of information on the past necessitates. Nothing in the experience of this historian is more fun that the discovery of an old home site deep in the woods – one where published information is misleading. In this case road records and old deeds pointed to a cellar hole no one seemed to know about and whose existence and identity makes the pieces of the old roads puzzle fit nicely. 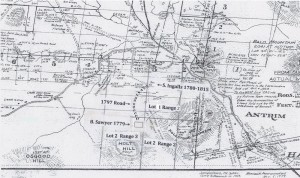 Map of Stoddard Drawn by Charles L. Peirce
click on link at end of article for large view

There’s a tangle of old roads in the northeast corner of Nelson that were laid out, then discontinued, as the land was cleared and better routes discovered. The key to several of these old roads is the location of two settlers from the seventeen seventies. Locating these old roads has been made difficult by the errors created by the earlier work of Parke Struthers in his A History of Nelson New Hampshire, and our misinterpretation of Charles L. Peirce’s detailed history map of Stoddard. Both place the Sawyer family’s homestead over one quarter of a mile north of its true location.

From the beginning we had primary documents that seemed to cast doubt on the location of the Sawyer homestead. The deed by which Benjamin Sawyer received the 100-acre wilderness tract from his father in 1779 placed his holdings in lot two range three of the Packersfield’s northeast quarter. This is well south of the “Sawyer” Farm on Peirce’s map; which is located in land owned at that time, by Solomon Ingalls. We did and Parke Struthers may have assumed Peirce referred to Benjamin Sawyer when he titled the cellar hole “Sawyer.” Struthers placed both Benjamin and his son, Joel, there. We knew there was a small cellar hole north of the “Sawyer” hole – one that’s not on any map. We assumed it to be the Ingalls place. In doing so we ignored its small size in relation to the thirteen strong Ingalls family. Not knowing of a cellar hole to the south and viewing the topography of Rollstone Mountain as too steep for a farm site, we assumed Struther’s location of Benjamin Sawyer’s home was correct. In doing this we were also ignoring the information on the deeds of Benjamin Sawyer and Solomon Ingalls; it gave us great difficulty locating the old roads.

After seven years mining Nelson’s archives, Dave and I have found too many errors in “modern” historians’ work to fully trust them. It should be simple just to trust the “original” documents like town records and deeds. The trouble is those have errors as well. In most cases deeds at the registry and records in Nelson archives are copies made quite close to the time of the originals, but copies subject to error. Getting at the truth like all good detective work means making hypotheses and testing them. The best test is always the discovery of an old road or cellar hole that fits. It is actually the only test I trust.

So how did we all come to be misled and had Peirce been wrong in identifying the Ingalls place as “Sawyer?” The answer lies in the development of the Sawyer farm. In 1779 the Benjamin Sawyer bought 104 acres on the western side of Rollstone Mountain from his father and moved his wife, Tabitha, and young son on horseback to Packersfield. Nathaniel Barrett, another neighbor from Amherst joined them at about the same time. Tabitha’s brother, Solomon Kitteridge bought another 104-acre lot and joined them in 1781. A cousin of Tabitha’s on her mother’s side, Solomon Ingalls, owned 104 acres just to the north and moved into the neighborhood just after the Revolution.

By 1806 the Sawyer family had grown to as many as twelve children with probably seven still at home. That year Benjamin doubled the farm purchasing the lot to the east. (Lot #2 range #2) In 1810 Benjamin sold half his farm to his son, Joel, in return for a lifetime of support. The effect was to keep the farm in the family and allow the elder Sawyers to live on the place past the time when age and no children for a workforce would limit their ability to work the farm.

In 1815 the Ingalls family left Nelson for Rodman, New York. The next year Joel Sawyer mortgaged the farm and bought the Ingalls farm adding it to his own. The addition of a further 40 acres to the east brought the Sawyer farm to about 350 acres. It is likely that Joel moved his family into the Ingalls home allowing Charles Peirce to label it “Sawyer” and Parke Struthers to assume that meant Benjamin Sawyer.

Now that we are virtually certain that the “Sawyer” cellar hole was originally the home of Solomon Ingalls, the two road descriptions make sense. The Ingalls site could be reached by a road running northeast from our newly discovered Sawyer farmhouse site. The Ingalls cellar hole is on the road “at the corner where the road turns to go over Rollstone Mountain.”

As exciting as our “new” cellar hole is; we’d feel even more sure of our conclusions if we could find evidence of the road that connected the Benjamin Sawyer and Solomon Ingalls cellar holes. On May 12th, the team of Al Stoops, Nina Iselin, Rick Church and Kathy Schillemat followed two parallel walls northerly from the Benjamin Sawyer site. The walls soon gave out, but it was possible to follow the traces of the road in a gradual arc from the former home of Benjamin and Tabitha to the home built by their neighbor, Solomon Ingalls. We are also expecting to find an old road that runs west connecting the Sawyer Farm site with the Old Stoddard Road near the parking area for the Bailey Brook Trail. That will require another exploration.

In the meantime I’ll remember a friendly skidder operator, a wild ride through the winter woods and the awe I felt when I beheld a home site unknown to prior historians. 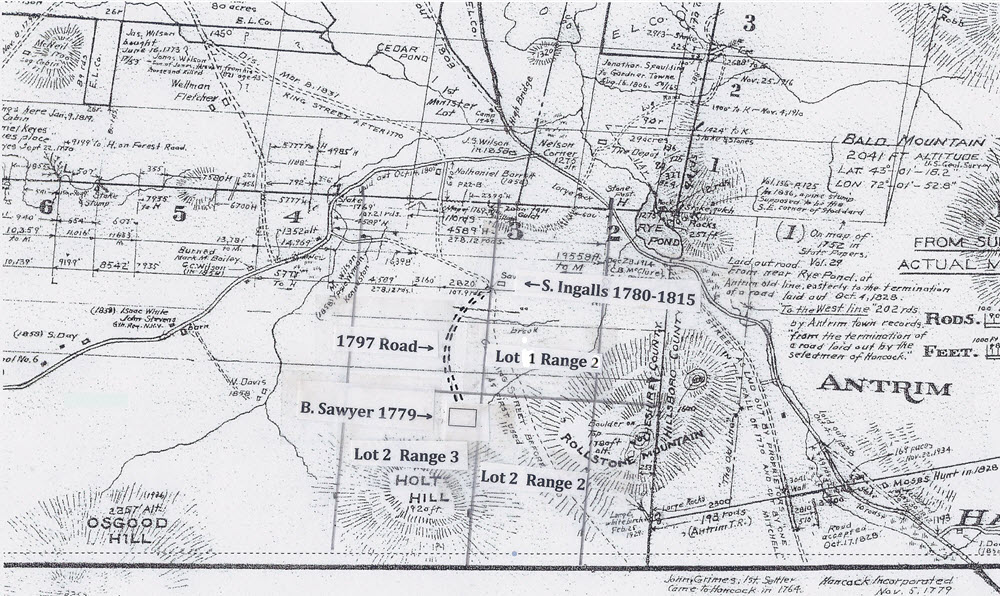 Scenes from the site