At the proprietor’s meeting in March 1773 the town voted to petition the royal governor for incorporation as a town. Breed Batchellor was appointed agent to present the petition on behalf of the Monadnock Number Six proprietors. Almost immediately Batchellor heard rumors that the Blanchard family would fight him.

The Blanchard family was important in early New Hampshire. Joseph was Agent for the Masonian Proprietors when they made the Monadnock Number Six grant. His son, Joseph JR was the surveyor that fixed its boundaries. Another son, Thomas, was one of the Monadnock Number Six proprietors though he immediately sold his share to Thomas Packer. Joseph had a stake in all of the towns granted by the Masonian Proprietors and was active with his associates in trading stakes in one town for those in another. The Blanchard family ended up with substantial stakes in Nelson, Dublin, Stoddard and Acworth.

The first documented interchange between the family and Breed Batchellor was Jonathan (another son) Blanchard’s sale of 2135 acres to Batchellor in 1763.  Several of Joseph’s children inherited his interests in Monadnock Number Six including James and Catherine.

In August James Blanchard petitioned the Masonian Proprietors to block incorporation. His petition made it clear that he felt incorporation with its implicit recognition of all that had taken place under the Monadnock Number Six Proprietors was inimical to him. He accused Breed Batchellor of running the operation as a personal fiefdom for his own benefit and to the detriment of Blanchard and settler interests. The petitioners asserted that the terms of the grant had not been fulfilled. Further he charged Breed Batchellor with numerous illegal activities. His charges:

Blanchard’s case rested on the fact that the terms of the grant had not been met.  Those terms required that there be fifty settled families each with a house and twelve acres cleared.  The petitioners claimed the lack of roads had slowed settlement and that much land was owned by people making no effort to settle. The stakes were high. Should the grant be withdrawn for non-compliance the validity of all land transactions was questionable. There were about thirty families in town and numerous other landowners who stood to lose a lot.

The petition to the Masonian Proprietors to block incorporation was not made directly by James Blanchard who was not a resident.  James Bancroft whose family had purchased hundreds of acres in the southeastern quarter from the Blanchard was employed to gather signatures.  The ten men petitioned that the incorporation be held up and that any shareholders deemed delinquent (no settlement activity) have their lands confiscated and delivered to people who would settle.  Batchellor held many lots that fit this description as did the Packer family. James Blanchard had a few acres cleared, but lived in Dunstable where he grew up and had substantial property.  In response Breed Batchellor, Abijah Brown and Thomas Upham compiled an inventory of settlement activities that showed thirty-six families settled and 910 acres “improved.”  Their claim: the requirement was met because only 600 acres was required to be cleared (12 acres for each of 50 families).

This fact-based response wasn’t enough as both sides soon resorted to all kinds of dirty tactics.

In October eleven different residents petitioned the governor to the effect that the charges in the petition were false: The Bancroft petition stated that sixty families were required to settle when the true requirement was only fifty. Poor roads were not the reason for slow settlement, the lack of provisions to sustain a family in the early years was.  James Bancroft and the other petitioners were all from the Blanchard Quarter where Batchellor was not responsible for the roads.  And, worst, the Blanchard complaint actually arose from the sale (by Breed Batchellor as Proprietors Clerk) of Blanchard land for failure to his assesments.  The town was fully engaged with twenty-one of perhaps thirty residents signing one petition or the other.

In October the signers of the original petition sent another recanting their charges. Also that month Nathaniel Breed and Abijah Brown wrote to the governor saying that Breed Batchellor had promoted settlement and that the first time they had met James Blanchard he had said “if he [Batchellor] would not give up the land sold for taxes”, he would do Breed Batchellor “whatever injury he could.”  The two letters contain nearly the same wording.  Two former residents, now living in Charlestown, wrote nearly identical letters to the governor supporting Batchellor and claiming that Blanchard had attempted to get them to sign his false petition. One said “I heard Mr. Blanchard say he would “tare him [Batchellor] all to rags” but if he were to return the land, he would retract the petition.

James Blanchard deposed townspeople. One admitted having no money to pay taxes and being allowed to work off $4 on Batchellor’s farm. Another told the justice of the peace that Batchellor had told him that petition signers would likely be hauled in front of the governor.  At Blanchard’s behest the Masonian Proprietors hired Major Josiah Willard of Keene to make an independent inventory of settlement. While out on the survey, Major Willard, asked residents if they had any complaints against Batchellor. They said the roads were so bad they could not get to their houses by horse, that Batchellor had refused to let them work off taxes by building roads and that they had been threatened with summons to Portsmouth. (The exact nature of the dispute between Batchellor and Willard is not known.  Perhaps it was an investment dispute; they had jointly purchased 104 acres of land from Thomas Packer in 1763.)

Batchellor petitioned the governor again in November. He said that the Masonian Proprietors had commissioned Willard of Keene “a near kinsman of the Blanchard’s and inveterate enemy of mine”; that the survey involved riding down one road and asking people he met about acres cleared, etc., and that Willard discouraged settlement by telling people he met that they had no legal title to their land. Nathaniel Breed in a letter to the Masonian Proprietors recalled meeting Willard who had refused to look at his farm and had underreported the acreage. Nonetheless Willard’s survey was similar to the earlier one. Another resident, John Stroud, wrote that Blanchard had offered him ò20 not to side with Batchellor. Finally James Bancoft, the petitioner who recanted, recanted his recantation saying Batchellor had offered a barrel of rum for the first recantation. Another settlement survey was done in January 1774: 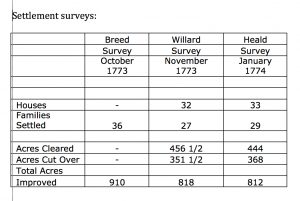 There is no record of how the matter was settled. We do know that Monadnock Number Six was incorporated as Packersfield on February 22, 1774. Six days later Breed Batchellor secured an extension from the Masonian Proprietors of two years to meet the terms of the grant. He gave his personal note in the amount of ¦100 and interest “for damages.”  James Blanchard never settled and had sold his holdings within a few years of the incorporation.

We do not know anything definitive about Thomas Packer’s role. He had died, but his family was still related by marriage to the Royal Governor and had a huge investment in Monadnock Number Six. The family was well placed to help Batchellor prevail. At his death in 1771 he owned some 6,000 acres in Monadnock Number Six including the entire northwest quarter. That quarter was entirely unsettled and not even laid out in lots – not helpful to the settlement requirement. With the extension of time to settle and incorporation, Thomas Packer’s son and heir, Thomas Packer III began to sell his lots in “Packer’s Quarter” at prices double those in other parts of town just five years earlier. The Packers did not full realize their Packersfield investment until 1804.