Beth Hawkey, from Englewood, New Jersey, married Newt Tolman in 1928 and their son Renn Tolman was born in 1934. Beth resided at Tolman Pond until 1938, when she moved to Pomfret, Connecticut, and married Joe Barrell.

During her time at the Pond she helped with the family business: running the boarding house, the summer camps and entertaining the many guests.

The following, excerpted from her family notes, gives a delightful accounting of what life was like at Tolman Pond during the 1930s: 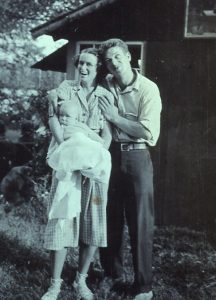 Beth and Newt and baby Renn

Despite the work inside and out, there was always time for play and sports. For instance, in December when the pond was covered with black ice, there was skating, with a bonfire burning on the shore. Thanks to Fran, the great organizer, we had a couple of hockey teams, one headed by our friend from Dublin, Robb Sagendorph, an ex-Harvard player. There was also individual skating, often on ropes tied to Harry and Molly, the two horses, who pulled us about almost as fast as did Newt in his Chevy station wagon. There were also a number of figure skaters, among them Alice Sharples and the almost professional Trixie Sagendorph, Floppy’s classmate at Vassar. So inspired was I by Trixie’s skill that she took me on as a pupil buying me a dandy pair of Canadian fancy skates. 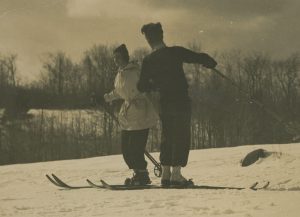 Then, after the December skating, there was skiing in January and February and sometimes into March, before the advent of “sap season.” Skiing was Newt’s domain; not only was he first-class, but he also invented and built a double-ended ski, allowing for incredible maneuverability. He also built a pair for me, and, being a good skier, I would join him in a downhill ski dance, both of us conscious of the ohs and ahs from the other skiers on the slope. Then we also teamed up to teach skiing to the young ladies of two private schools in Connecticut.

And with the end of skiing, sugaring came along, the nights being still cold and the days spring-warm, causing the sap to flow. This also was Newt’s domain, and oddly enough there were always several families up to join the fun and the work. In the Fall, Newt had stacked sufficient hardwood against the century-old sugar house in the meadow just below the pony stable for use for the boiling down of the maple sap in the huge copper-lined evaporator inside. 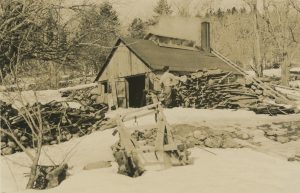 Buckets, tops and spouts were piled in the big horse-drawn sled, and into the snowy woods Newt would drive Harry and Molly, the horses, with singing kids on top of the load. And soon one could hear the sap drip-dripping out of the trees into the buckets, which, when full, would be emptied into a large collecting tank on the sled. Back at the sugarhouse, a big tank would receive the gathered sap, which would then run by gravity down into the evaporator. At the height of the season this went on day and night, for, after all, sap, like time and tide, waits for no man. To make one gallon of maple syrup, it required forty gallons of maple sap.

Syrup making is never frenzied, but always constant, and so the circumstances were just right for lots of story telling or a spontaneous concert of some sort, while the sap was evolving into the finished product. Newt was proud of his syrup, as he should have been, for it always qualified for the highest state rating and prize; in those days (hold onto your hat) $4 a gallon! In a good season, the yield was around four hundred gallons, some for home use, and the rest for sale. What a beautiful sight were those shining gallons with their green woodcut labels made by Fran. Often the output was sold out by summer. 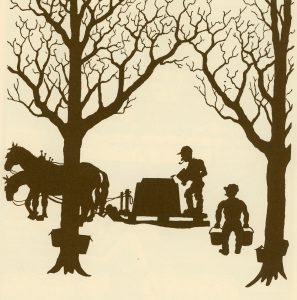 During the evaporation process, Newt and I were careful to see that the young ones got their share of hot syrup; some pouring their ration on clean snow to cool and eat, others beating theirs into candy.

Profits from sales were used for new equipment where necessary and now and then for something or other needed at the farmhouse; and always for the annual ski trip to Mount Washington’s Tuckerman’s Ravine. 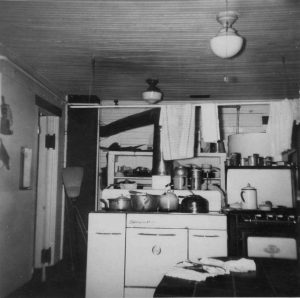 I can remember one particularly profitable season when Newt and I decided to buy Ma Tolman a gas stove, to supplement the big wood range she cooked on. But Ma was only mildly interested, since she was a devotee of the Yankee philosophy of “Eat it up, wear it out, make it do, or go without.” Why, she asked, should she cook with bought fuel, when Tolman Pond furnished an unending supply of first-class firewood? And besides, she reasoned, if she used gas, the men might grow lazy. But at last we persuaded her to accept the new stove, which she finally conceded could be of use at times. And use was made of the shining object, if not as a stove, at least as a handy cabinet. For in no time the oven was packed with kitchen articles, and the top three burners, too. The remaining fourth burner was used occasionally to make those delicious little deep-fried cakes which were served swimming in maple syrup with a blob of whipped cream on top, a boardinghouse favorite. 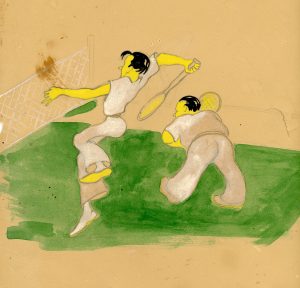 And with the coming of summer, the tennis court was readied by Floppy and Fran, who managed it well. Then, every Sunday saw a spirited volley ball game, made more spirited by the professionalism of George Vincent, one of the summer cottagers on the Pond. The most important game always took place on the Fourth of July, after the picnic out front, at which there was a chowder made from the horned pout caught by Ma after a hard day’s work. 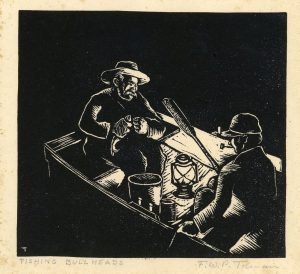 No matter the season, after the outdoor activities, there was always something doing in the evenings in the farmhouse. Often there would be music, with visitors joining the Tolman trio of Fran at the piano, Newt on the flute, and Pop at the drum. There might be a visiting accordion, a fiddle, a horn of some kind, and the music produced would often be first-rate. It was always so when the Commonwealth boys were present: those fellows from Oxford and Cambridge were well versed musically and crazy about American folk music. I can recall George Young, a Scot, who played the penny whistle and the bagpipes and taught the Tolmans many a U.K. tune in exchange for being taught the Arkansas Traveler and other American tunes.

Besides music, there were intellectual games and many a brilliant conversation; and once in a while there would be a monologue, such as the one by the famous sculptor, George Gray Barnard. I should mention that these evening activities were always preceded by a good-sized gang doing the dinner dishes, with Fran at the dishpan leading the singing.

Moreover, in the winter, there were weekly meetings of our little writing group, eight local literary souls who had either published, or hoped to. Sitting before a fire in the Farmhouse Ski Room, each of us would read aloud his creation on an agreed-upon subject. Each piece would be analyzed, with suggestions for making it publishable. Gordon Tolman, Newt Tolman, Robb Sagendorph, and Robert Faulkner were the veterans who had seen print, while Ruth Smith and I and the two others were the comers. Eventually, everyone in the group had published at least once. I remember the meeting at which Robb Sagendorph announced that he was going to start a New England Magazine. A magazine? “Oh, Robb, it will never go. Even if you are subsidized the first year, there’s no way you can succeed, etc., etc.” I happened to be the only one who encouraged Robb, for I though he was just crazy enough to make a go of it. And so he started his magazine in 1935, and, as we all know, YANKEE became one of the three largest regional periodicals in the country. (At the time, none of us knew that Trixie’s family, of Montgomery Ward wealth and the sole supporter of Admiral Byrd’s famous Antarctic Expedition, had underwritten the magazine for the first year.)

After the first issue, subscriptions, manuscripts and even ads, began pouring in. Robb obviously needed help and he called on me, who had originally backed him in his venture. So I went over to Robb’s greenhouse, fixed up as the magazine’s headquarters. I loved driving over the dirt road and overlooking Mt. Monadnock, driving Fran and Floppy’s open four-seater Model A Ford, which they had passed on to me when they had acquired a “better” car. Little Renn was left in Ma’s care, for after all, I’d be helping Robb only for a month or so. But far from it. Soon, there was so much to do that I stayed on, eventually bringing Renn over to play with Lorna Sagendorph and be taken care of by Lorna’s nurse. Then Robb asked me to stay and accept the job of editor. This I did for three years. I loved the work, admired Robb, and, had I not remarried in 1938 and moved away, I surely would have remained for many years. 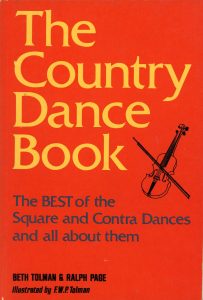 During those three years, I, along with the square dance caller, Ralph Page, wrote a series of YANKEE articles on country dancing, eventually published as The Country Dance Book, charmingly illustrated by Fran’s line drawings. The book enjoyed five or six editions and served to make Ralph Page the most sought-after caller in New England.

Here, I should mention the weekly square dances we held in the Nelson Town Hall. For these, the Tolman orchestra, with Albert Quigley (Quig) on the fiddle, furnished the music, while the caller was Ralph Page, protégé of Uncle Wally Dunn, who had been the chief caller of the region for years. It wasn’t long after we began the weekly dances that the country dance mania had swept New England. 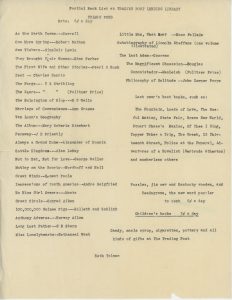 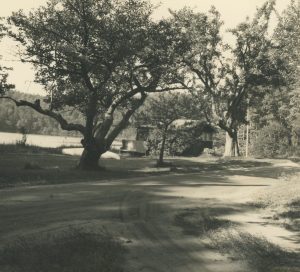 The Trading Post across Tolman Pond Road from the farmhouse

In addition to the many contributions Beth made to life at the Pond, she opened up The Trading Post, part of which was a lending library. We recently came across the attached list of offerings at the Trading Post!