Eli Burnap: Eli and Thankful Burnap came to Packersfield from Reading, Massachusetts in 1795 at the age of twenty-three. Eli’s parents, John and Mary Burnap followed them to Packersfield, occupying D-4-2 in 1799. A year later Eli died. His wife sold the place to her father-in-law and moved to Vermont.

John Burnap sold the farm to Stephen Harrington in 1802. Harrington established the brickyard at C-4-15 and the tannery near the house at C-4-8. He was followed by Asa Spaulding and, he by Nehemiah and Mary Flint. Flint ran the farm and the brickyard until his death at the Osgood mine in 1850. Mary stayed on the place until 1853 when she sold to Sylvester Spaulding, son of Asa Spaulding.

Numerous residents followed including Jewett Morse (1865-1880), Winslow Atwood (1880-1916) Benjamin Baker and George Henderson. In 1946 the farm was acquired by Wayland Tolman. Four years later he sold it to Mabel Curtis and her son, Robert (Bobby). Mabel was a hardworking and valued housekeeper at the Tolman farmhouse and Bobby had a reputation as a hard-working person who did odd jobs around town. Wayland allowed them to pay off the mortgage in work and Bobby was the last resident, dying there in 1989. The place was in poor condition and was torn down. 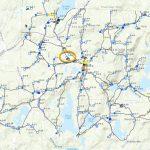