Eulogies for Francis W. P. Tolman and Albert D. Quigley by May Sarton

Eulogies for Francis W. P. Tolman and Albert D. Quigley by May Sarton 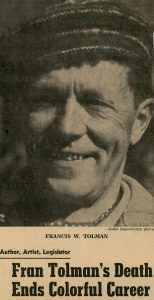 “The chair” must recognize,
“The chair” cannot endeavor
With quip or firm command
To tell us where we stand.
Keep death from loving eyes:
“The chair” is stilled forever.

Let Nelson’s town recorder
Write, here this story ends.
Kindness and verve are gone.
His gavel has come down
To bring us all to order
For the last time, my friends.

That look so keen and fair,
The look of Francis Tolman,
Held to the form with grace,
And now, without his face,
We recognize “the chair,”
And honor here a whole man.

Divided village, still
Today in simple grief
Before the loss of Fran,
That loving natural man,
We and each brook and hill
Join in communion.

And every woodcock mating,
Come May, will never know
The caring that he spent
Nor his dear merriment.
But we record it, stating
Nelson is lonely now. 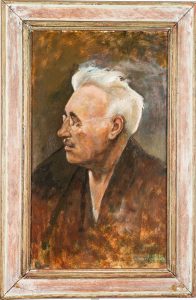 Lately, he lay downstairs, a dying king,
His violin at the end of the bed like a couchant beast
In some old tapestry or heraldic painting,
The battered orange cat blinking by the fire,
The fat asthmatic dog snoring beside him––
Family, neighbors gathered there all day:
He kept his wit intact, though flesh had nearly left him.
And still he sparkled like a frost-touched leaf,
So withered now a breath might take him,
Accepting laughter as a final homage.

He was everyone’s father, graced in the giving,
Prodigal of tenderness real fathers rarely give,
Enfolded us, believed, could weep like a woman,
Yet held fast to those values that stand up to death,
Kingly in this. Yet always a poor man, bills pilling up,
Never out of the woods, never quite in the clear––
His last act to paint the portraits of four boys.
Somehow he did it, summoned himself, and kept his promise.

Improvident, generous, his white hair in a crest
Said, “I’m cock of the world because I love it”––
Cock, not by possession, but by love.
Maker of violins, he held them in his hands
Because he wanted the true sound, the singing tone;
Painter of this landscape and of all our faces;
We have to see now and we have to try to heal
Without his accurate, intimate eye and ear.

(Remember how he loved the early spring, its redness,
Its feathery graces, remember how he loved Cézanne,
Renoir, Degas, in those last days held in his hands
A portrait by Delacroix, and would not be distracted:
Often I have seen him silenced by a fit of looking.)

Lover of ceremony, and all courteous graces,
He was one of the last fiddlers, jigs and reels,
And swing your partners!” We’ll dance in the old hall
A last dance for Quig, the fiddler, whose tunes kept
Our feet light, our eyes open, our hearts true.
I tell you his joys are with us. We are not alone.
(But, God, it’s an empty village that we have to fill!)

Published in the Keene Sentinel and read at his funeral service.