The remnants of this modest home are difficult to find today. The old road that connects it to the original road to Sullivan is used as a wood road today and that traffic has compromised the foundation of the building. Hawthorn’s initial farm was 40 acres in size and purchased in 1798. Over the years of his ownership he added and sold small pieces. The farm was 66 acres at its largest.

Eleazur Hawthorn and Submit Newton married in Packersfield in 1797 and purchased the farm here the next year. He seems to have come from Jaffrey. They were both in their early thirties. Eleazur and his wife must have been difficult for the Packersfield community. Submit first appears in Packersfield as a “single woman” from Temple, NH, warned out of town in 1780. As such she was considered a welfare risk from which the town wished to protect itself. She would have been eighteen at the time. What was her role in Packersfield in 1780? Why had she left Temple? In 1795 she had a son, named Epaphras Newton, born in Packersfield in 1795. The son’s last name suggests that Submit never married her son’s father. In 1799 Eleazur and Submit had a son of their own, Silas, born in this house. Submit Newton Hawthorn died in 1808. She is probably buried in the Village Cemetery. With her history, it is not unusual that there is no record of her resting place.

Eleazur’s name appears frequently in the Nelson Town Records from 1808 to 1814 because he bid for the care of “non compus” child named Epaphras Newton — his stepson. Apparently, he no longer had personal financial responsibility. The boy lived with him until 1814 when Hawthorn seems to have gotten into a legal dispute with the town concerning him.

In 1810 Eleazur married Betsey Atwood, daughter of Josiah and Prudence Atwood (C-4-20), and twenty-four years his junior. They couple had a son, Josiah, before moving to Jaffrey, perhaps as a consequence of his legal troubles. The couple would have five more children. Hawthorn sold the farm in 1814 to William White son of Samuel White (E-3-4) who with his wife, Mary (Butler), kept custody of the boy until he, too, sold the place in 1816. The farmhouse was abandoned at that time.

Epaphras Newton died in Nelson in 1839 at the age of forty-four. He was “bid out” to a number of Nelson residents after William White left town in 1816. His life after the Whites is known only from records of Nelson men bidding to supply his care. His was one of the most expensive welfare cases suggesting a profound disability. Like his mother, he also has no known final resting place. 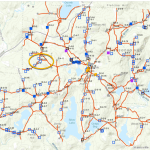